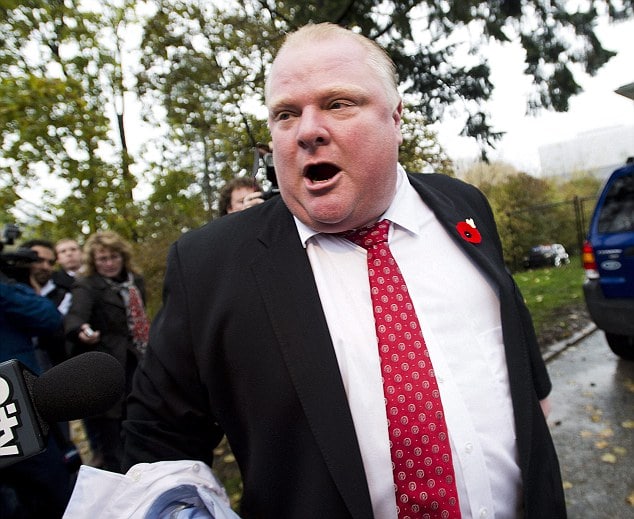 Toronto Mayor Rob Ford insists he does not use crack cocaine anymore.

It looks like shit is about to really hit the fan as Canadian authorities have now stepped forward to tell that they are now in the possession of a video that purportedly shows the likeliness of Mayor Rob Ford smoking the good shit.

The video is said to have come about after authorities had seized upon several computer hard drives on June 13 as part of Project Traveller raids.

It wasn’t until forensics teams earlier this week were finally able to recover deleted files that they came across the contentious video.

Told Toronto Police Chief Bill Blair: “The TPS is now in possession of a digital video file and that evidence will be presented in court”

Interestingly the the Chief went on to tell the mayor does appear in the video, “but I’m not going to get into detail.”

That said he did say he was “disappointed” with what he has seen in the Ford video.

Today’s revelation confirms reports that emerged this past May about the existence of a video allegedly showing Mayor Rob Ford smoking crack cocaine.

In the days following assertions that our collective hero was on the good stuff, Mayor Rob Ford went on to deny the existence of the video, going on to tell: “I do not use crack cocaine. Nor am I an addict of crack cocaine.

Needless to say what was up for interpretation was whether Mayor Rob Ford had ever used crack cocaine, not whether he was a user, addict or junkie.

While Mayor Rob Ford had earlier denied the existence of the crack cocaine video, two reporters from the Toronto Star had gone on to tell that they had seen it.

Police told pursuant to the allegations of the video, Mayor Rob Ford was put under surveilance.

Read one document dated July 30, 2013: ‘Lisi approached the driver’s side of the Mayor’s vehicle with a small white gift bag in hand; he then walked around to the passenger side and got on board.’

‘After a few minutes LISI exited the Escalade empty handed and walked back to his Range Range Rover.’

With the story of the good stuff wafting in the air it wasn’t long before a flotilla of reporters were canvassing Mayor Rob Ford’s house this morning, who increasingly became agitated when asked questions by the media.

Told the beleaguered mayor to reporters, even going on to push one photographer off his driveway: “Get off my property!”

“What don’t you understand? Get off my property, partner!”

Who was also keeping quiet was Alexander Lisi’s attorney, Seth Weinstein who went on to tell: “Given the outstanding charges against Mr. Lisi, it would not be appropriate at this time to respond to any inquiries about the charges or the information contained within the ITO.”

What makes the arrest of Alexander Lisi even more compelling is the fact that Mayor Rob Ford had even gone so far as to recently vouch for his ‘friend,’ whom the mayor called a ‘good guy’ and ‘on the straight and narrow.’ This whilst investigators were investigating potential narcotics deals and prior to the earlier arrest of Alexander Lisi after threatening to kill a former girlfriend.

What is not known though is whether the mayor was ever the subject of an investigation or if the raids which had procured the new video was solely an effort aimed at drug probes directed at Alexander Lisi.

Of course the million dollar question now is will authorities publicly release the video to the public and will the public demand Mayor Rob Ford to kneel down in front of a guillotine with his eyeballs firmly placed on a glass pipe running heady fumes up and down his about to be severed spine….?

Then there was this reflection on the web that made me wonder as well:

It would be good for Toronto’s image if the video is released now, thus forcing Ford to resign since he won’t be able to credibly deny what it shows.

But if the police hold onto it and it doesn’t get leaked, he’ll continue with the denials, no one will be able to prove otherwise, and he’ll hang on to power, but as a laughingstock.