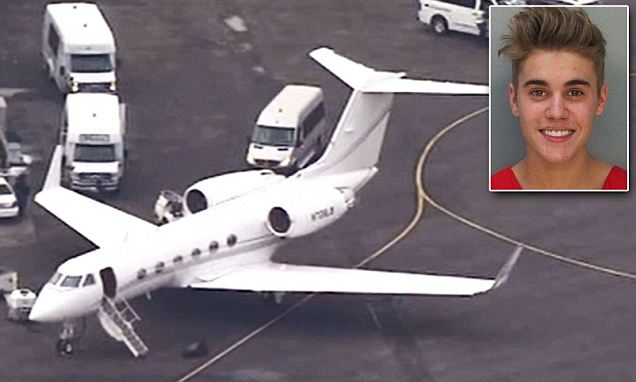 Seems shit goes from bad to worse for Justin Bieber as reports that his private plane had been held up at  Teterboro Airport, New Jersey this afternoon after streams of marijuana put the airport authorities on alert.

Yes kids, it’s part 40 billion of ‘life keeps getting kinkier, sexier and wilder because I am a teenager media idol.’

Did you sign the Justin Bieber deportation petition? Exodus of a legend?

And the tasty fumes go something like this. Inhale deeply:

Justin Bieber’s private plane has been held at a New Jersey airport and police have searched it because it allegedly smelled like marijuana.

The latest updates reported that the 20-year-old and all other passengers on the plane have been released from police custody after a search found no drugs on the plane.

Shit comes courtesy of reports that Biebs and his dad, Jeremy, the uber role model of role models and entourage were stopped after landing officials noticed the pungent smell of marijuana emanating from the plane.

Biebs and dad were in town for this weekend’s super blow and nearly didn’t make it after authorities decided to bring drug dogs on board. Fortunately for Biebs that shit got quickly flushed before the world had him in handcuffs again.

And now inhale for another mesmerizing drag:

The plane has now been spotted at Teterboro airport, which is commonly used for private flights, but 20-year-old Justin nor his father have been allowed off the aircraft.

And once again exhale all that good fell yummy ‘I am the media hero that can do no wrong,’

According to the nypost, matters got out of hand when cops detected ‘a strong odor of pot’ and sent drug sniffing-dogs on board.

The plane, believed to be a twin-jet Raytheon Hawker 800 was ordered held until cops and the dogs could check shit out.

After doing a thorough search cops gave the final green light for Biebs and dad Jeremy to alight.

Customs and Border Protection officials refused to comment on the incident.

The incident comes after Toronto authorities decided to charge Biebs with assault on Wednesday.

Our collective hero is already facing a driving under the influence of marijuana case in Miami and remains under investigation for felony vandalism in California as well as drink driving and resisting arrest charges in Miami last week.

According to some tabloid rags, Biebs spends up to $8,000 a week on weed as well as guzzling a codeine-laced cough syrup concoction plus Xanax and Ambien.

Expect more spectacular instances of self implosion over the weekend or your money back.