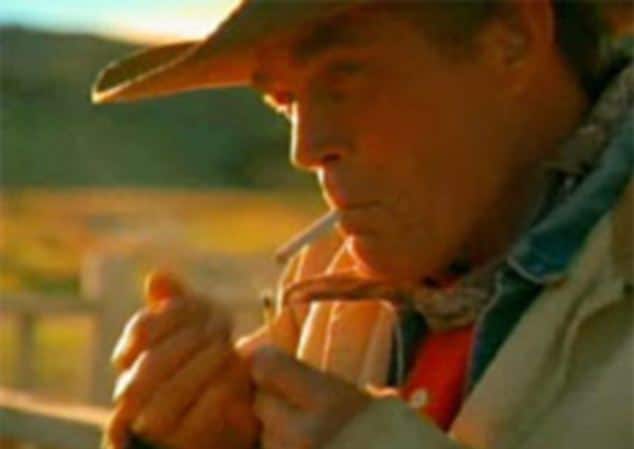 The Marlboro Man dies but the legend lives on.

Eric Lawson, the former 1970’s Marlboro man has died of lung disease at his San Luis Obispo, California home. He was 72 years old.

A self admitted smoker since the age of 14, Eric Lawson would go on to become the iconic rugged Marlboro Man often stoically overlooking the world in national wide billboard campaigns during the 1970’s.

Lawson was an actor with bit parts on such TV shows as “Baretta” and “The Streets of San Francisco” when he was hired to appear in print Marlboro ads from 1978 to 1981. His other credits include “Charlie’s Angels,” ”Dynasty” and “Baywatch.” His wife said injuries sustained on the set of a Western film ended his career in 1997.

Lawson would later appear in an anti-smoking commercial that parodied the Marlboro man and an “Entertainment Tonight” segment to discuss the negative effects of smoking. Susan said her husband was proud of the interview, even though he was smoking at the time and continued the habit until he was diagnosed with COPD.

“He knew the cigarettes had a hold on him,” she said. “He knew, yet he still couldn’t stop.”

Which is to say we all know smoking will eventually catch up with us but like the stoic Marlboro man resigned to his fate and the ubiquity of his legend putting away those cigarettes was never really an option. By now it had become an identity larger than life.

How bittersweet, a legend eventually succumbing to what made them a legend in the first place.

Perhaps not out of coincidence, a few actors and models who pitched Marlboro brand cigarettes have died of smoking-related diseases. They include David Millar, who died of emphysema in 1987, and David McLean, who died of lung cancer in 1995.