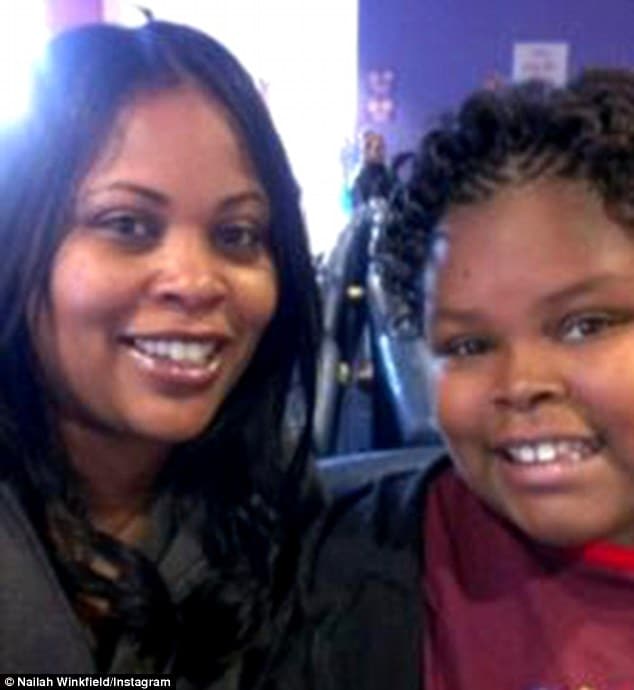 Jahi McMath‘s family have won a temporary injunction to keep the 13 year old brain dead girl from been taken off life support. The decision came as a previous order was set to expire Monday afternoon.

The temporary stay until January 7 mandates that the family must find a facility that will agree to keep her clinically alive before the ‘extinction’ date.

To date the family have told that they have found a New York facility that has agreed to take the girl in, this after getting rejected by several facilities in California.

Yesterday’s last minute decision comes after the girl’s mother had considered seeking a restraining order against the Oakland, Californian hospital which has sought to turn off life support after being declared dead by two different doctors.

The family have since told through family spokesman Omari Sealey, the uncle of Jahi McMath that they ‘… have a doctor in CA who will be by her side, door- to-door throughout transfer to NYC.’

‘We have also contracted an air ambulance that has agreed to take her from door to door. We have a doctor who will be by her side throughout this transfer,’ he said. ‘We need to get her to a hospital that wants to treat her. We are not just crazy people hoping for a miracle. We have doctors who agree with our stand.’

The news comes despite doctors and previous judges agreeing that there is no way to bring the legally dead teen back.

‘We have a pediatrician that has seen Jahi and sworn that she is not dead. The family has located a licensed facility in the state of New York that has agreed to take Jahi.’

Sealey, a 27-yaer-old scientific recruiter said they’re hoping the hospital will budge on its hard line stance against helping Jahi be transferred. ‘I think that we are very, very close if the hospital will co-operate.’

The news comes despite doctors and previous judges agreeing that there is no way to bring the legally dead teen back.

”We have a pediatrician that has seen Jahi and sworn that she is not dead. The family has located a licensed facility in the state of New York that has agreed to take Jahi.’

Sealey said the family took video of Jahi responding when her mother touched and talked to her. He also said a pediatrician examined her and said she was not dead.

But hospital spokesman Sam Singer said the girl’s movements are involuntary muscle movements that in no way signal someone is alive.

Regardless of the chances, Jahi’s mother, Nailah Winkfield held out hope and tried to relish the moments following Monday’s temporary victory and called the hospital’s treatment of the issue ‘disgusting.‘

‘By the Grace of God she is still living and moving,’ she said.

Commotions arose after Jahi underwent a tonsillectomy at the hospital on December 9 to treat sleep apnea and other issues.

Yet after awaking from the operation the child started started bleeding heavily and went into cardiac arrest. She was declared brain dead three days later.

The family said on its fundraising website that it had raised more than $25,000 for a possible transfer.

On Monday, Sam Singer, a hospital spokesman, reiterated the position of the doctors.

‘This is one of the most tragic situations imaginable,’ Singer said. ‘A family has long their young daughter. But unfortunately, Jahi is deceased. No amount of hope, prayer or medical procedures will bring her back.

Cynthia Chiarappa, a hospital spokeswoman, has said officials would have to understand the capabilities of the New York facility before allowing a possible transfer.

The hospital also said it would need to confirm there is lawful transportation included in any transfer plan and there is written permission from the coroner.

Doctors at Children’s Hospital have refused to perform a tracheotomy for breathing and to insert a feeding tube – procedures that would be necessary to transfer Jahi. The hospital has said it’s unethical to perform surgery on a person legally declared dead.

Ok…I’ve seen this story so many times that now I’M emotionally distraught over it. Please…Let this little girl R.I.P! So unfortunate that nobody in her camp is strong enough to admit that “Enough is enough” and pull the plug. smh Wow.

She is not in a coma, she is brain dead. Brain dead means dead, no one has ever come back from brain death.

I understand they need to grieve but keeping her on life support is doing nothing but wasting resources at this point.

What happened to this girl is very sad, and certainly will be the object of a medical malpractice lawsuit. That given, what is happening now is very obviously due to the families lawyer hoping to increase the pain, suffering and costs involved in the case in an effort to increase the monetary damages that may be awarded, and thus his percentage fee. It is cynical manipulation of the situation for money, let no one imagine otherwise.
This judge is not following the law. The law clearly states that brain death is legal death. The judge has no business ruling that a corpse must be kept warm. A court appointed doctor even confirmed the death.

What’s of note is that the court understands that by law it can not bring back a brain dead person. It has also been told no hospital in California seeks to take receipt of the brain dead girl and put her on life support. It understands that human life can not be restored when one is brain dead as opposed to when in a coma and yet it agrees to mandate that the girl must stay alive until a possible hospital is found, never mind the complications inherent in moving the child.

Is it possible that even the courts have mistaken the plea for life, the pain of a mother will never compensate for the horrific, the unfair, the improbable that one can sometimes die from simple routine things and that sometimes its best to accept in the real world miracles and super heroes are at best mythological beliefs to be kept at a distance? Then again define faith…..