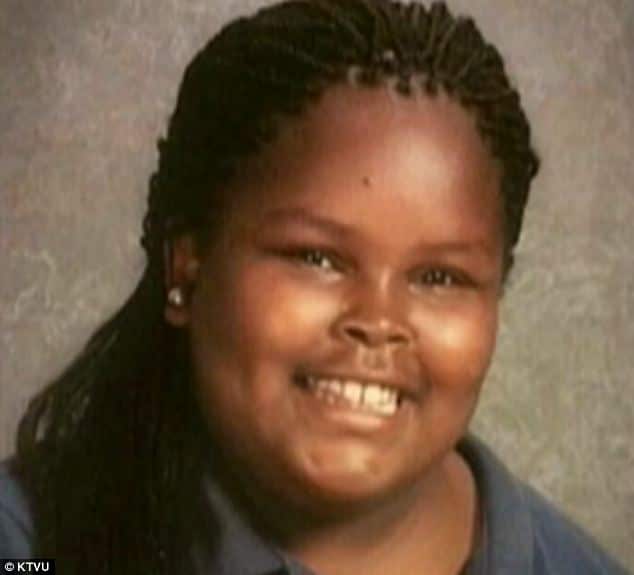 The family of Jahi McMath have gone on to express condemnation after doctors have told they seek to take the 13 year old off life support against their wishes.

Having suffered complications during a routine operation on on Dec. 9 to have her tonsils removed, Jahi McMath went into cardiac arrest and soon there after became brain dead.

Under California law, to declare someone legally brain dead, two doctors must declare it at least three hours apart.

Told the girl’s uncle, Omari Sealey: ‘We didn’t want her to be removed from life support but the decision is out of our hands because it’s been declared a legal death.’

But in a startling telling, Jahi’s mother Nailah Winkfield has told she felt that the hospital was pressuring her into switching off her daughter’s life support so that they could re-use the bed.

Told the mother: ‘They just have a social worker follow me around all day long asking me “Do you have any other family that needs to see her?” like trying to put a rush on it,’

Went on to say Omari Sealey: ‘As long as she has a pulse, we want her on life support,’

‘We want her to come home for Christmas. We want to give her presents. We want a chance for a Christmas miracle.’

Upon having undergone surgery and by then recovering, the girl began to bleed from her nose and  mouth.

Told Winkfield: ‘My daughter had actual clots sliding out of her mouth and they gave me a cup and said, “Here, catch them with the cup so we can measure them,’

It wasn’t until the mother started screaming that nurses at last reacted to Winkfield.

Reiterated Winkfield: ‘I was the last one to see Jahi,’

‘I said, “Somebody help my baby please!” And they came in and starting working on her. The next thing I know, the doctor said, “Oh no, she doesn’t have a heart rate anymore.”

Added Omari Sealey: ‘There was a lack of urgency,’

‘It’s shock, it’s disbelief. You never think something like this will happen to you.’

Jahi went into cardiac arrest and was resuscitated.

She spent the following day, Tuesday, on a ventilator, but by 2am on Wednesday doctors said she had swelling in her brain, and on Thursday, she was declared legally brain-dead, according to the Oakland Tribune.

Spokesperson for Oakland Children’s Hospital went on to tell in a statement: ‘We’re very sad about this outcome, about what’s happened to her, but at this point I have no information on the details of the surgery.

‘We will certainly investigate what happened. In any surgery there are risks and there can be unexpected, unanticipated complications.’

Went on to reiterate Dr. Daniel Robbins, a pediatrician of Lamorinda Pediatrics: “Patients die in about one in 25,000 tonsillectomies.”

“There are pros and cons that need to be thought through carefully,”

“But by and large this actually is a procedure that is relatively safe fewer and fewer children now have it done although it can dramatically improve, say, sleep apnea that her family says Jahi had.”

Interestingly many on the web have gone on to speculate if the hospital may be covering up foul practices after initially voting to keep Jahi McMath on life support, whilst others have wondered if it is a deep case of denial on the family’s part?

Update: The family of a 13-year-old Oakland girl who was declared brain-dead after tonsil-removal surgery served a cease-and-desist order to Children’s Hospital Oakland on Tuesday demanding that she be kept on life support, then said hours later that the hospital had agreed not to remove the ventilator.