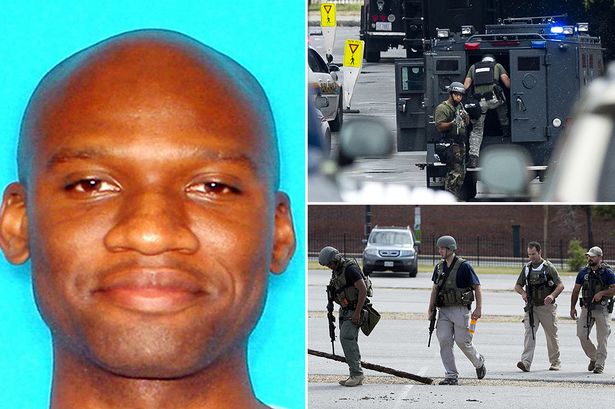 In an attempt to affix a profile on Aaron Alexis the media has gone on a hunting expedition where yesterday’s Washington Navy Yard gunman can be explained in relaxing parables that ought perhaps make us all comfortable that this was just a one off event.

Unfortunately yesterday’s massacre was not a one off event but just a continuation of the latest series of eruptions that have colored the landscape over the last year, from James Holmes, Adam Lanza and the other occasional weekly shootings that go on that the press chooses or not to report on.

Making headlines is now the cherished belief that Aaron Alexis by implication was a nut case as the media go on to now report the gunman had recently complained of hearing voices in his head and was undergoing a series of mental health problems. Which is to say ‘wacko went crazy and flew the coup,’ but America is still fine and all them other issues we perhaps ought to be having might not be so pertinent after all.

Tells huffpo: U.S. law enforcement officials are telling The Associated Press that the Navy contractor identified as the gunman in the mass shootings at the Washington Navy Yard had been suffering a host of serious mental issues, including paranoia and a sleep disorder. He also had been hearing voices in his head, the officials said.

Unlike other advanced nations where massacres of this sort are almost unheard of given strict gun laws (but tell that to the NRA and lobby and politicians on the take) the presumed discussion is that Alexis was just a nut job unable to cope with life and by implication an aberration. Never mind the fact that living life in the US is certainly disingenuous, marked by constant struggle and watching the divide between the rich and the poor ever getting wider. Not that this is polite talk in the media landscape.

Alexis had even gone so far as to argue that he felt discriminated against (do colored people feel this or are they just making this all up some would argue). What also purportedly vexed him was the fact that he wasn’t being paid on time and found himself forced to borrow cash to keep afloat. Not that some of you haven’t been through this trauma.

Nevertheless most of us never resort to this type of wild lashing out. Instead we have become a nation that staves off the fear of inertia and the feeling of helplessness via convenient self medication (government sanctioned prescribed or not), working harder and faster for the eternal American wet dream (that these days is the lot of the upwardly socially mobile) and other mind numbing activities that can take us away from the decay of self and society.

Which is not to say that most of us aren’t trying harder and smarter to get by (and some of us do quite well actually with this work ethic) but some like Aaron Alexis in the end just snap. It is not to justify his actions but to understand how we as a society have ended up in a zone with ever greater vilification, stress, negation, tolerance and celebration of the violent and tawdry and yes mental unease, even if for some of us that may mean hearing voices in our heads. Of course hopefully you wont be going out on a shooting rampage anytime soon either…

It might be one thing to say a lone gunman might be literally mad and to pass that of as the sole reason as to why they commit such atrocities but perhaps it is even crazier to avoid discussing that perhaps the vernacular and the current cultural and social dialectics are just as mad that may also serve some to react beyond what is morally, socially or ethically correct. Even if as a society most of us are so often lost as to what necessarily counts for morally or ethically correct if one dares observes current dynamics…not that the media is helping matters.