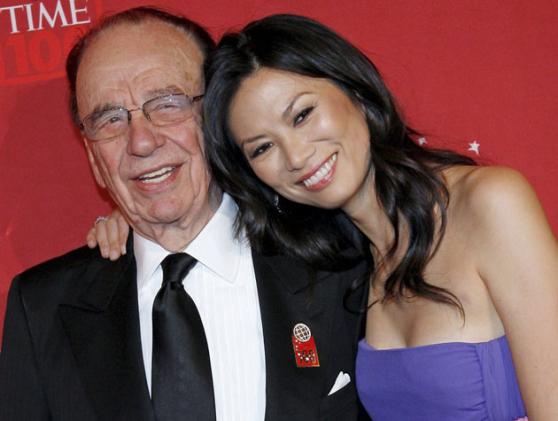 Pundits have gone on to wonder what may have ultimately brought down Rupert Murdoch‘s marriage to wife Wendi Deng as the media baron has gone on today to announce that he is filing divorce from his third wife.

At present the reasons for the divorce filing have not been made not clear. That said a News Corp spokesman has gone to intimate the couple’s relationship had been irretrievably broken for more than six months before Murdoch filed for divorce today.

It is known that Rupert Murdoch, 82 first met Wendi Deng, 44 when she was working for News Corp. subsidiary Star TV in Hong Kong back in 1997.

It was only two years later tell nbc that the couple went on to marry on a yacht in New York Harbor — less than three weeks after Murdoch’s divorce from second wife, Anna, was finalized. The pair soon went on to have two daughters, born in 2001 and 2003.

The marriage breakdown comes less than two years ago in July of 2011 when a fiesty Wendi Deng sprung to her husband’s rescue, during a British hearing into phone hacking by News Corp when a protester attempted to cluster bomb her husband with a foam pie. At the time Deng had attempted to smack the protester during the ensuing pandemonium.

At the time her efforts were seen as undying loyalty towards her husband especially in lieu of ceaseless reports that Deng had only gone on to marry Murdoch, 38 years her senior because she was  ‘gold-digger’ and ‘trophy wife’.

Nevertheless sources have gone on to say that ‘This divorce is no surprise, it’s been on the cards for a while. Wendi and Rupert have been living separate lives. She’s a New York fixture and is interested in her own career.’

Murdoch’s net worth was listed at $11.2 billion by Forbes in March, ranking him 33rd on the U.S. billionaire’s list.

A source has gone on to tell MailOnline there is a prenuptial agreement in place and the divorce will not have any real effect on News Corporation.

In the one has to wonder how did these two who are in their own right magic pieces of work (and not magic in the benign Sunday afternoon charming way) finally come to implode and grate on each other…?

Then again perhaps the right question might be why did it take so long in the first place….?

And then there was this comment I came across the web that made me wonder as well, not that Rupert Murdoch is a choir angel either:

What I’ve read was the former Mrs. Murdoch is nasty piece of work according to all those who worked for her, including the nanny. I think even Rupert had enough of this mess