Alec Baldwin’s soul will one day swoon for the NY Post’s Andrea Peyser and of course there might be a dollop left for NBC and the NY Daily news too.

Oh dear kids, let’s all admit it, Alec’s a tad upset and I am afraid it has nothing to do with a poor disillusioned bit part actress from Montreal. Nope. That I am afraid was another lifetime ago.

This time the ire of our collective hero’s contempt is reserved for those in the media. In fact so peeved is our hero, he has gone on to tweet that it’s now the media who is stalking him. Oh dear, shock, horror, tremble and quickly back off. Well maybe not.

Confused? Don’t be, the NY Post’s Andrea Peyser will explain to you how she exactly came to be the scum of the earth that has bitten at Alec’s soul. The floor is all yours Andrea….

nypost: Alec Baldwin — my life. My love. My soul mate.

With passion such as this emanating from every last sweaty orifice of dear Alec’s being, how could I not be completely smitten at the sight of him? I cough. I tremble.

Hmm, who would of thought journo’s were still snarky? Not me? . I’m still under the illusion that they’re like your doting uncle, friendly, courteous ever ready to expediate you when you want a quick nip from that bottle of moonshine hidden under the cupboard but there also to occasionally rack your hands, metaphorically speaking, should you go fumbling for the cupboard keys…

Continues Andrea: “You won’t find a writer more casual with the truth in all of journalism than Andrea Peyser,’’ he practically panted in a Twitter post. He even spelled my name right.

Alec. You complete me.

And there was this finger licking trinket too:

There was also another incident of the NY Daily news sending its pack of wolves to stare and follow Alec’s fiance, Hilaria Thomas that left the couple upset too. I know Alec everyone in the media business is heartless.

Not to be left out is also NBC and the Today show, where Alec lets it be known how he feels about the lovable sweets… 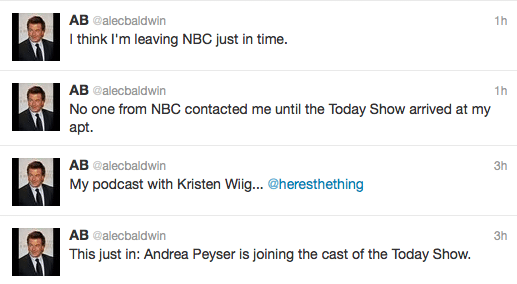 And of course what’s a nice way to finish an article about abusive tabloid journalists than to revert back to NY Post’s Andrea Peyser (thank you Alec) :

His unabashed arrogance, reserved solely for women and lesser creatures is hot. It got me at “Hello.’’

But now I, and I alone, know the truth. Alec Baldwin is no stinker. He’s merely misunderstood.

So when I wrote that his waistline was “expanding,’’ I confess I was being unjust and unfair.

Alec’s waistline is “expanding and contracting and expanding.’’ Cut the big guy some slack!

I’d expect another kind and loving tweet to be fired in my direction today by dear Alec.

And maybe I should take out an order of protection.

Oh dear if only there was an earthquake or some politician having a torrid affair with a 3 foot midget we could then all go back to some serious reporting instead. Who knows, it must be slow Wednesday tabloid day…?