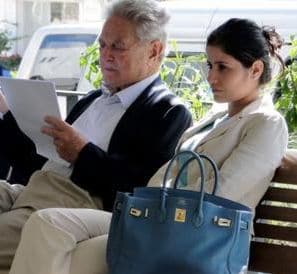 If I go to the press, will my billionaire ex boyfriend be forced to pony up change his mind about buying me a multi million dollar apartment? Or just how about suing his ass for $50 million for aggravating the hell out of me?

It seems billionaire financier George Soros has had his hands full lately,  first with being rumored as to profiting as much as 10 billion by betting against US treasury’s and now by being harangued about his decision to ditch his 28 year old gold digger, aspiring Brazilian socialite and former child soprano, Adrianan Ferreyr (can you see now why George’s tongue would get numb at the prospect at this hawt bixch wrapping her legs around him?) for his current hawt bixch, traveling nurse (yes every wealthy geriatric has one stored in the closet somewhere)  and wet nurse, 39 year old Tamiko Bolton.

Cries Adriana to the NY Post (at least they make it a specialty to listening to jilted socialite girlfriends and wives, see here bixches)

“For five years, he was my boyfriend. He was respectful and loveable. Then, suddenly, he changed and became cruel. I don’t know why he would do this to me,” wept spurned Latin lovely Adriana Ferreyr.

Adriana then goes on to explain how her hawt bixch George didn’t have the audacity to spend one dime on her for the first 3 years of their relationship, which is completely believable, cause personally I wouldn’t so as much be seen holding hands with George even if I was wearing Cartier mittens unless the bixch had promised to pay off my student loans sometime between my the entree and the dessert on our first date. But that’s just me and there’s no way I could see Adriana holding George, a multi billionaire to the standard I would’ve held him. But then again, I like to play hard to get.

And the misery continues…

“He is a likeable person. He is outspoken,” she said of the famously lefty Soros. “I spent a lot of time with him, and I had a lot of feelings for him.”

Still, despite his estimated $14.5 billion worth, he’s a real cheapskate, she conceded.

“During the first three years of our relationship, he gave me nothing, not even a birthday present. Nothing,” she said.

“After the three years, he gave me some expense money, but that was it. He never paid my rent or gave me an allowance.”