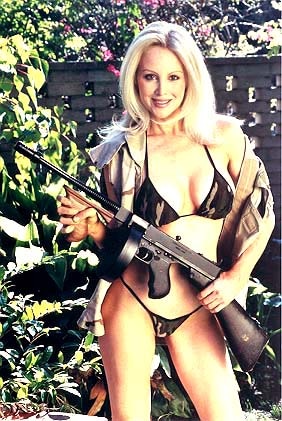 We here at Scallywag and Vagabond do love to terrorize. So we sat down with the impossibly lovely“How to Get a Rich Man” author (former Playboy model) Donna Spangler to see what this so-called trophy business is all about. Biological or sociological? Indentured servitude or a glamorous free ride? Disdainfully wrong or deliciously right. You may not agree with Mrs Spangler but that’s okay…..after all there are many ways to kill a bird or as in Mrs Spangler’s case land a very shiny and plump one

SCV: What are the resume requirements for being a trophy wife?

Donna Spangler: There aren’t any complete resume requirements but you need to be the best you can be in order to attract the best.

SCV: So if all the beautiful women are out there hunting the same rich prey, how does one go about making the capture?

Donna Spangler: Don’t go out looking fat and sloppy. And don’t sleep with your prince too quickly. The man will think less of you if you do that right off the bat.

SCV: How did we end up with the concept of trophy wives?

Donna Spangler: The male nature is to try to get the best that they possibly can. No matter if he’s fat or ugly. You know that a guy isn’t going to feel good about a girl who’s toothless, smells bad, is extremely overweight. I mean you know that.

SCV: So it’s anthropological? Did they exist in Ancient Rome?

Donna Spangler: If you go back and time and you look at like arranged marriages, the parents have always tried to get their daughters with the most financially stable men. They would even give dowries to give them the best social standing possible so they could have the best life. I’ve been with a lot of poor guys and rich guys as well. Even if the poor guys were great in bed you always feel cheated because they can’t do jack diddly squat for you. When they have social pull there are more fun. You get tired of going to a picnic in the park. Who’s gonna pay your light bill?

SCV: In the age of emancipated woman, why does one still aspire to be a trophy wife?

Donna Spangler: If you look at a feminist and they say being a model or a playboy person isn’t good because it’s taking away from us, well, no, we should be able to do whatever it is that we want.

SCV: How rich is rich? What type of income or assets should a man have before an aspiring trophy wife pounces?

Donna Spangler: Ok. All women don’t wake up and think, “Oh God I want to marry someone who can’t pay the bills”. Whether we want to admit it or not, we’re all attracted to power and wealth and things that will give us the best. And men too. In a different way. For men, they want the thing that visually and sexually pleases them. But it’s very important to develop your personality. They don’t want someone who just smiles and stays home and bakes cookies.

Donna Spangler: (Sighs) They do… They do exist. For men it’s different because traditionally women really look for a man that’s at least equal to them, if not more than them. In our society I think we perceive trophy men as… emasculated, less than whole, it’s not good for the man, it’s hard for them.

SCV: What would an aspiring trophy wife do if she had her own money? Would she still look for a trophy husband?

Donna Spangler: I think that women want to have a strong man. I don’t think it’s always necessarily about the guy having to be a super guy or something, although it never hurts. Although if they were divorced and they had their own money, they would want to have a guy who makes them feel good.

SCV: Why are trophies so important in our culture? Can we live without them?

Donna Spangler: Trophies are important because they are something we aspire to. Anybody who isn’t aspiring to get the best things out of life and the happiest most wonderful experiences out of life is someone who’s not motivated and who has no hope.

SCV: What does a trophy wife do all day?

Donna Spangler: They’re not just sitting around eating bon bons. That’s just very boring. These days it’s very exciting to have your own business, to have your own thing going on. For example, I love animals and I do a lot of things with animals, particularly cats.

SCV: If you are a trophy wife must you oblige when your husband summons you for sex, even if you’re not in the mood? 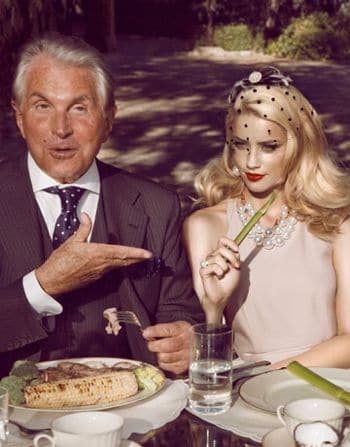 Donna Spangler: In life if you have a partner and you’re not particularly feeling well, my other half knows that I haven’t been feeling well, so it wouldn’t be in his best interest to try to procure sex from me. But if you’re both feeling decently and not sick then it’s good to keep the sex life going. Sometimes you don’t feel like having sex but you can get yourself in the mood. There are times when you need to go the extra step, even if you don’t feel like it.

SCV: What’s the difference between a trophy wife and a prostitute?

Donna Spangler: Ok…well for one you have a relationship. A prostitute on the other hand is a pay-for-play person with any Tom, Dick and Harry that will fork out the bucks.

SCV: Are men responsible for perpetuating the idea that women are commodifiable sex objects? Or are the women themselves responsible?

Donna Spangler: I think nature is a very big part of it because in the end we’re all sexual beings. It’s the way what god made us, and I believe that’s a positive thing. If we didn’t have the sexual urge obviously we wouldn’t be perpetuating our race.

So yeah I think men are women are equally responsible. One feeds the other.

Donna Spangler: Absolutely but part of who we are as people is what we’ve made out of our lives. If you’re a toothless wonder who doesn’t take care of yourself, living in a trailer park, not putting forth the effort, then that shows who you are. And who we are in life is what we put behind ourselves.

Donna Spangler: Are you kidding me? Some of the richest guys are drop dead gorgeous and sexy! That’s not to say there aren’t rich guys who are ugly, there are, I’ve seen a lot of those too.

SCV: So having money makes a man sexy?

Donna Spangler: Not necessarily but I think if a man has money it makes him feel more confident. And there’s nothing like confidence for sex appeal.

SCV: And lots of money.

Donna Spangler: Not necessarily, but sometimes, yes. Wealthy guys, of course, they want what they want and they try to tell you what to do and that sort of thing…

SCV: Because they can…?

Donna Spangler: Well they think they can…

SCV: What if a man is rich but really cheap?

Donna Spangler: Ugh that’s the worst. You might as well be with a guy who doesn’t have as much money who gives you more emotionally.

But really I think if a guy’s cheap it may well be because he’s not generous at heart, money or not. Say you’re starting out with someone and you’re both poor, what good is it if he becomes wealthy and then he’s cheap with you? You don’t want to think about someone who’s really really cheap.

SCV: Is there a difference between a trophy wife and a housewife?

Donna Spangler: Hmm, I’m not sure how to respond to that. A trophy is a female who’s attractive and who a guy is proud of being with. A trophy can be a housewife too. Maybe a housewife tends more to the house, whereas the trophy wife oversees the duties of a housewife through her help.

SCV: Can you be a trophy wife and an important political figure?

Donna Spangler: Why not? Of course. You can be a dynamic woman who’s beautiful and who has things going on in her life. Yes.

SCV: Can you be a trophy wife and a working woman?

Donna Spangler: Having a wealthy man as a husband or a partner is a job. There are responsibilities. Whether it’s managing the staff, overseeing the financial portfolio… it’s not just a matter of staying home and doing nothing, or just going and getting your nails done. Like exercising. If you don’t exercise, you’ll become unhealthy and unfit.

SCV: Do you think people look down on trophy wives?

Donna Spangler: There is a kind of stigma, but I think it’s a matter that in life people don’t always understand what’s going on, what is to be this person…

Donna Spangler: If you like. People might perceive that all you do is just get your hair and nails done. But why would they say that? After all, I’m sure they like to get their hands and nails done too!

Donna Spangler: Definitely pre. For the man who has a shitload of money, that man wants to get her a ring that’s as big as possible. It’s alike a big penis, you know? It’s like my wife has one that’s bigger than yours.

SCV: What does a trophy wife do if her husband goes bankrupt?

Donna Spangler: Men as a rule, once they’ve made money they know how to make money. A lot of times, women stick it out depending on the severity of the situation. If there’s monetary things going on, it creates disruption in your life, it could create fights. So it may not be a function of oh this person is losing their money, it’s maybe a function that there’s uncomfortability in the relationship because of it.

Donna Spangler: Oh god. Listen. In life, especially these days, you don’t want to marry a man with no soul. Like I wouldn’t want to marry a billionaire if he was an ass. You don’t want to do that. And it’s ok if you totally love a man and he’s poor, there’s nothing wrong with marrying poor. But you’ve got to realize that if you marry a poor man it might be your responsibility to make the money and if you’re ok with that then there’s nothing wrong with that. But that’s a stressful position.

SCV: Is dating like the stock market? How does an aspiring trophy know when to cash out?

Donna Spangler: She’s got to date a lot of different people to see what’s going to work for her. You can’t just meet one person. What if you go out with a guy and he has no money and he makes you pay the bill? That’s not very sexy and that certainly won’t make a woman’s twitter twotter.

SCV: Is the supply for rich men as great as the demand?

Donna Spangler: Well let me just say this, there obviously aren’t as many rich men as there are poor men, but who the hell wants to end up with a friggin’ poor man?