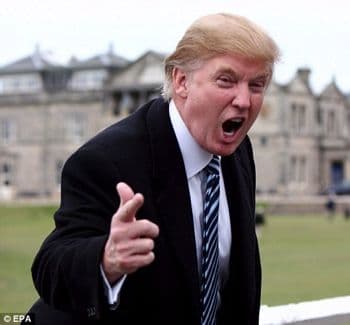 He may have been the hero to most members of the West Palm Beach golf club for ousting one purportedly incorrigible member, Greek shipping heir (77 year old Harry Theodoracopoulos) but today the Donald is sitting with egg on his face after a court ruled that he would be forced to reimburse the loud mouthed member (aren’t all Greek shipping heirs loud mouthed?) his membership fees of $200 000 as well as legal fees.

Argues the Donald: ‘He just doesn’t behave properly. I’ve warned him a number of times, he’s been a problem for a long time.’

Apparently the Donald was so incensed with one showing of purported bad behavior on the field that he argues 3 potential new members were so appalled that they soon there after declined to join the club.

The court also heard that since only the club’s full admission’s committee can suspend members not just one member, as the Donald unilaterally did (talk about bad manners kids) the club would be forced to return MrTheodoracopoulos’s fees. Mr Trump for the record promises he will appeal the ruling.

Isn’t it time you took on a loud mouthed Greek shipping heir too?

DONALD TRUMP PISSES OFF NEIGHBOR BY ERECTING A FENCE AND SENDING HIM THE BILL.

DONALD TRUMP WANTS YOU TO KNOW HE’S NOT RACIST- ONE OF HIS APPRENTICE WINNER WAS BLACK.

DONALD TRUMP’S HAIR TRIES TO MAKE A GET AWAY.