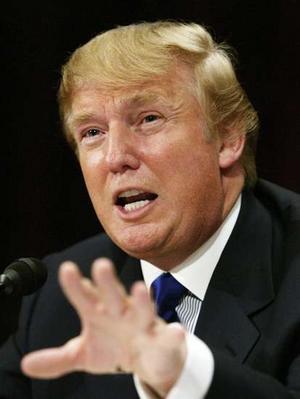 Donald Trump will always make sure you believe him.

Pursuant to recent allegations that the Donald is pro love for everyone except if your skin is black (you can thank Van Jones of Color of Change for ramping up that campaign) the Donald decided now was the right time to settle the score and let America know he really has a soft spot for all of humanity- blacks included.

“In fact,” Trump added, “Randal Pinkett won on The Apprentice a little while ago, a couple years ago, and Randal’s been outstanding in every way. So I am the least racist person. But [Van Jones] is a guy trying to get some publicity for himself by attacking Donald Trump.”

So if the delivery boy who knocks on the door should happen to be black we should take that as a stellar endorsement that you love all people cause you whipped out a dollar tip?

Color Of Change argued that Trump’s crusade over President Obama’s birth certificate was steeped in racism, and said in a statement: “This is the first organized attempt to target these celebrities and demand that they, as prominent African-Americans, take a public stance against Donald Trump’s ongoing attacks against President Obama.”

What I think will make me believe that the Donald ultimately loves black people is when he digs deep into his wallet and takes out two dollar bills for the delivery boy.

DONALD TRUMP’S HAIR TRIES TO MAKE A GET AWAY.