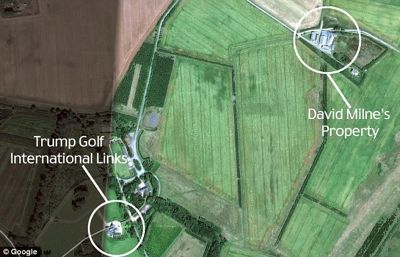 Woe to Donald Trump who knows a good scandal when he stars in sees one.

It’s no secret that Donald Trump has little love for his Aberdeenshire neighbor David Milne over there in the dunes of seaside Menie Estate in Balmedie, Aberdeenshire, Scotland. But over the weekend their uneasy relationship hit a new low when Mr Trump handed Mr Milene the bill for a new fence Mr Trump had built enclosing the estate of Mr Milene.

Why did Mr Trump erect a fence you wonder? Well if you can’t get your neighbor to sell out to you so can go out and create what the Donald likes to call the impending greatest golf course in the world- you then just box them out. Literally. And of course you then send the bill over. Well at least half the bill, since Mr Trump is at the end of the day a gentleman and he would hate to have Mr Milene carry the whole burden of the cost of the new fence, which ran at £5,640. Never mind the fact that Mr Trump failed to notify Mr Milene of his intent. 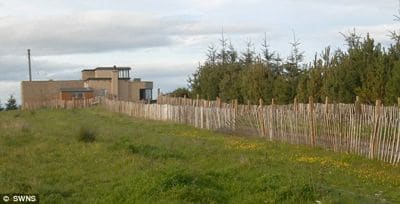 And what do you think was Mr Milne’s reaction to receiving the bill?

telegraph.co.uk: The health and safety adviser said Trump’s demand was “ridiculous” and that he would not pay a penny towards the fence.

He said: “I’m just ignoring the demand. There is no way I’m going to pay it.

“As far as I’m concerned it’s just another attempt to intimidate and bully me. But it’s not going to work. I’m not paying any attention to it at all.

“I could not believe it when the bill arrived. I priced the materials myself and I could put up the whole fence on my own for about £800.

Yes, £800, but what Mr Milne fails to realize is each and every nail that Mr Trump used to secure the fence came with a smidgen of the Donald’s very own spit- which everyone in their right mind knows is at least worth another £65 000.

“It’s made from the cheapest stuff available, but that’s the kind of standard we’ve come to expect from Mr Trump and his organisation.”

But then again why criticize the Donald for doing what he knows best- which is to make a public spectacle of himself getting his demands met at any means possible.  Never mind the tear drops that must have welled in his eye ducts as he cast the first nail in the ensuing fence perimeter.

This all follows allegations from Mr Milne and 4 of his other neighbors who refuse to be bought out Mr Trump that Mr Trump has been pursuing a campaign of afternoon crumpets and lavender tea intimidation and harassment to get them to move on. 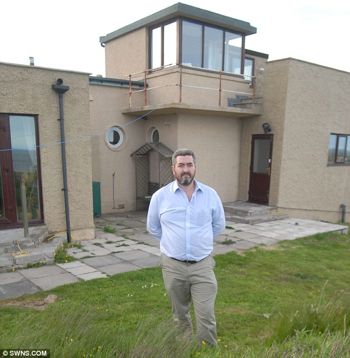 Mr Milne has accused the tycoon of trying to harass and bully him by doing things like piling a huge mound of earth behind his property.

For his part Mr Trump responds he simply felt that in fact the demarcation of Mr Milne’s property was wrong and needed to be corrected. Which you can only imagine has the owls in the woods gushing with feigned gratitude.

Never mind, when the Donald finally gets round to it he will build a wall between himself and the solar universe- but at least in that instance he’ll probably volunteer to foot the whole bill himself.

Don’t you wish you were a shameless bully tycoon too?