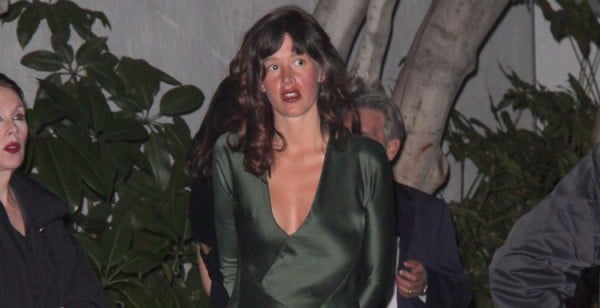 Has Paz had a chance to take a swing at you too?

As we all know getting drunk and watching tequila bottles spin back and forth are the happier pursuits of Paz de la Huerta. And who can blame her- it’s the perfect role for this hell raiser who by now has made getting out of bed with a sliver of Jack Daniels between her bra straps (oops scratch that) breasts as simple as stirring a frozen olive martini.

That said- it’s time to find out what Paz got up to this past Sunday morning while you were home drinking warm goat’s milk.

theblemish: It all started when Paz went over to model and former reality star Samantha Swetra’s table early Sunday morning which, coincidentally, Lindsay Lohan was at and started hitting on one of Swetra’s male friends. All of a sudden, Paz, 100% drunk, tripped and crashed into a nearby table which caused one of her breasts to pop out. Swetra, who sounds awesome, yelled out “triple axel!”

Paz didn’t like this very much because she threw a glass at Swetra’s leg and punched her in the face. Says a source, her “fist connected squarely with Swetra’s lips and nose.” The shattered glass managed to cut up Swetra’s leg as “Blood was dripping down [her] leg.” Continues the source, “Lindsay was pulling shards of glass of it.”

As you can imagine Lilo is sitting there picking at the shards and licking the triple sec clean, but this is Paz’s adventure and if Paz is going to sock you in the face then she damn well do as she pleases…

Lindsay supposedly took Swetra back to her hotel to escape and hopefully they had hot, lesbian comfort sex. Sources at a recent event claim the 26-year-old Swetra has facial bruises and a swollen lip and said “I am pressing charges.”

One day when Paz least expects it she will come across a crate of tequila with the words scribbled on it- ‘please drink to abandon.’ At that very moment Paz will wake up from her nighmare and rinse the fear in an empty martini glass before adding a touch of last night’s fist blood and vermouth stuck in her purse.

PAZ DE LA HEURTA WOULD LIKE TO POINT OUT TO YOU HER DRESS ALWAYS MATCHES HER LIPSTICK.

DID PAZ DE LA HUERTA REALLY GET STONE DRUNK AND FLASH HER NIPPLES AT THE GOLDEN GLOBES?

THE BEST AND WORST DRESSED OF THE 2011 SAG AWARDS.