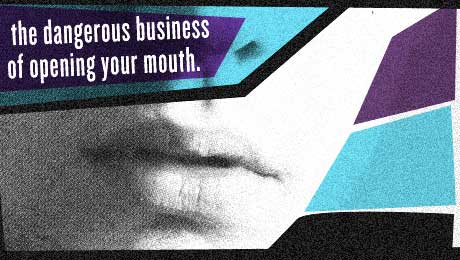 If you consult any reference book, it will tell you “Freedom of speech“ is the freedom to speak without censorship and\or limitation. The synonymous phrase, “freedom of expression,” is sometimes used to indicate not only freedom of verbal speech but any act of seeking, receiving and imparting information or ideas, regardless of the medium used.” This is a definition that is printed in our own constitution, and that we all have become very familiar with. It is a verbal liberty that allows us the right to have an opinion and variety of beliefs. Yet, in the present context, it seems as though freedom of speech is lacking the most vital part of the phrase— the actual freedom. There are many repercussions when it comes to being truly free with our voices; we cannot freely speak our minds in fear of being labeled. Our power of speech and what we have faith in is what makes us who we are and differentiates us from others, yet it seems that, more and more, we are living in a culture where there seems to be a right and wrong answer to any subject, and we can be immediately deemed stupid or ignorant if our views stray from the norm. How can we call it the freedom of speech and how can we be honest about who we really are when there are restrictions and boundaries placed upon our own “constitutional rights?“

The most recent controversy involving our “freedom of speech” was the incident where Carrie Prejean took the stage at the Miss USA pageant and spoke her opinion on same sex marriage. She voiced her own personal opinion (a stance against same sex marriage) and the chaos began. Taking a look at her answer, she doesn’t bash gay rights nor does she say anything against it. She simply answers with what she was raised to believe.

“I think it’s great that Americans are able to choose one or the other. We live in a land that you can choose same-sex marriage or opposite marriage and […] I believe that a marriage should be between a man and a woman. No offense to anyone out there, but that’s how I was raised and that’s how I think it should be[…]”

Perez Hilton later stated, “She gave the worst answer in pageant history. She got booed. I think that was the first time in Miss USA, EVER, that a contestant has been booed … She lost not because she doesn’t believe in gay marriage. Miss California lost because she’s a dumb bitch.“ But what made her a dumb bitch? It was an obvious fact from the displeasing expression on Hilton’s face that her answer had upset and changed his entire opinion of her. When dealing with a sensitive subject such as gay rights, whether we agree or not, we have to tiptoe around it. But why should we have to? Why should we be afraid of voicing our own opinions? How long has there been a correct and incorrect view? People are allowed their own opinions, their freedom of speech, and no one should be chastised for it. As of now, it seems the stance is this: if you believe in gay marriage, you are lauded, if you don’t believe in it, you become an ignorant bigot.

It all boils down to the fact that freedom of speech does not exist. We can voice our opinions whether they be about gay rights or which political party you are voting for, but the fact of the matter is, whichever belief is more “popular” or deemed “the right one” is the factor that brings down the wise words of the constitution. There is nothing we can do or say that doesn’t have some kind of consequence. We are constantly punished if we say something that isn’t the popular stance in mainstream media. Do we have to discount our own honesty and personal rights in fear of being penalized? It is human nature’s desire to be accepted and to fit in. We see it throughout public schools and the real world. Now, it seems to have carried on into our daily lives, as you skew or alter your own beliefs and opinions to fit in and be accepted. As the times change and gay rights becoming a more prominent and popular issue that people believe in, it has become a vehicle of sorting out the “good ones” from the “bad ones.” Yet, what gives anyone the right to deem someone wrong or right, politically incorrect or politically correct?