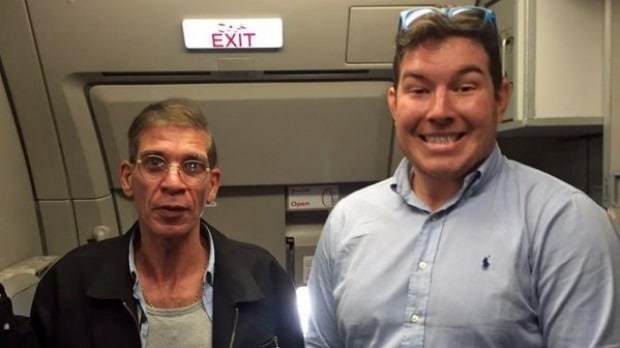 Ben Innes selfie: How one tourist helped redefine the manner and behavior of what it means to be a millennial as Egypt Air hijacker Seif Eldin Mustafa glibly played along.

In a morning of surreal disbelief a potentially lethal hostage situation involving EgyptAir flight MS181 came to an end when Egyptian man, Seif Eldin Mustafa was arrested. But not before a series of misadventures, miscommunications and even a selfie with the hijacker (whilst wearing his suicide explosives vest) by one of his prisoners, 26 year old UK man Ben Innes.

The misadventures began just on 8am local time, when Seif Eldin Mustafa, an individual running a nutrient supply company back in Egypt (does anyone else besides me see the irony?) hijacked a domestic EgyptAir jet flight taking off from Alexandria bound for Cairo and forcing it to re-route to Cyprus’ Larnaca airport, where he demanded to see his Cypriot ex-wife.

Upon landing at the airport, Mustafa agreed to allow 58 of the planes mostly foreign 62 passengers to leave while keeping captive the flight’s crew of seven.

During the course of the next few hours the man came to be mistaken for a passenger who had been allowed off the flight, Dr Ibrahim Samaha, an American based Alexandria University veterinary lecturer whilst also demanding that airport officials act as go betweens between himself and his separated wife that the lovesick man hoped to win over again. And how.

The hostage situation eventually came to a dramatic end just before 1pm when one of the pilots was observed struggling with someone inside cockpit before jumping out of a window.

Soon after Mustafa disembarked the plane at around 14.40 local time with his hands up along with  throwing some items on the ground, which were picked up by police and are being examined during the time of his arrest.

Yet what probably proved to be the unforgettable anticlimax of what could have turned out to be a disaster and very deadly affair was when the British traveler, Ben Innes sheepishly posed with the hijacker who at the time was laden with a suicide belt packed with explosives. That too turned out to be fake explosives, but of course one can’t help but wonder if that was something Ben Innes was necessary aware of or oblivious to?

Sent Bent Innes in an image of himself and the EgyptAir hijacker, Mustafa in a text message to one of his mates: ‘You know your boy doesn’t f*** about!! Turn on the news lad!!!”

According to a report via the dailymail, the friend reportedly responded: ‘Wtf? Is that a bomb attached to the guys chest? You ok? Let us know when you get off.’

Does it get any better than that?

Told one of the man’s mates: ‘Ben is a wild man and this is totally in character for him’

‘He was a big rugby guy and very into his banter and didn’t have much respect for authority.’

The incident has since led to social media commentators panning the man, with some wondering if his actions represent the bottom feeding of the millennials set (they do) and whether Ben Innes was at all bothered by the severity of the situation as he aimed to also get his perfect selfie (which presumably he would blast all over social media and ensuring him his legacy and his presumed desirable insider status).

Madness and selfies aside the hijacker’s eventual arrest ended a five-hours-long drama at the Larnaca airport which within the space of five hours had served to entertain, bemuse, sadden, scare, conflate and depress millions of viewers world over in front of their computer or tv.

Selfies and grandstanding aside and rushing estranged wives running to their mad husband’s aside, the incident did exposed sensitive questions, including how Mustafa was able to embark on the plane with a suicide vest laden with explosives in the first place?

Ironically Mustafa’s arrest followed a comment by an Egyptian Foreign Ministry official, who earlier told: ‘He’s not a terrorist, he’s an idiot. Terrorists are crazy but they aren’t stupid. This guy is.’

Along with some UK tourists presumably …. 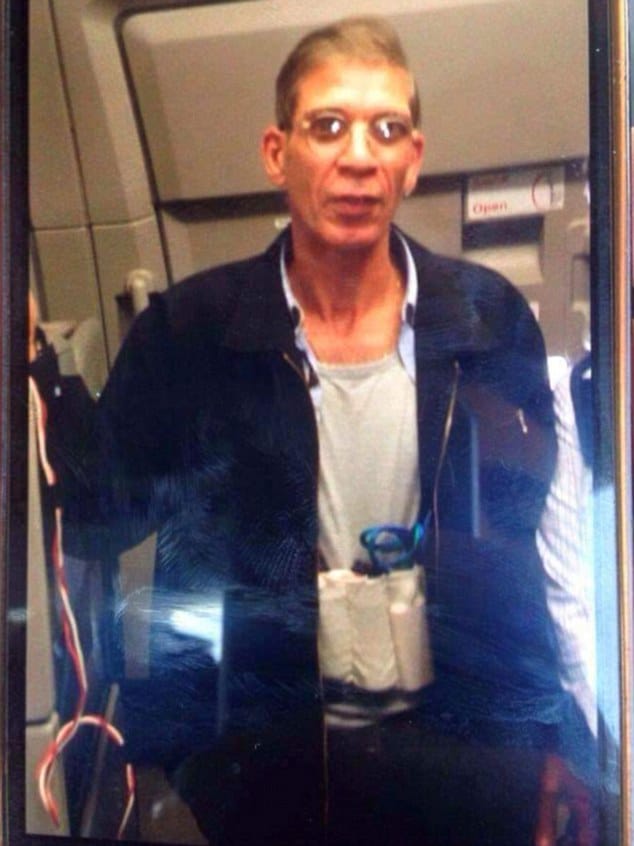