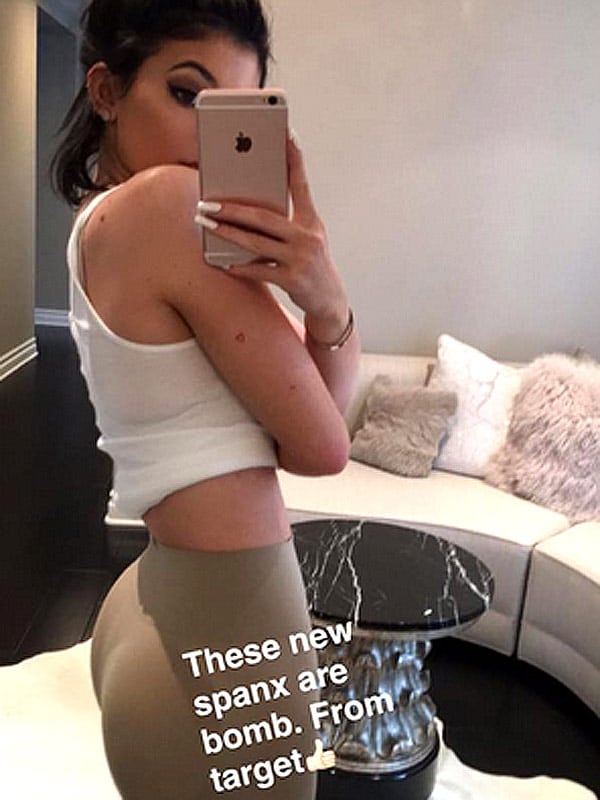 Reality starlet, Kylie Jenner, 18 is back in the press after sharing an image on snapchat, Monday showing off her latest beauty secret: her fake pert butt/bottom.

Reads a cheeky caption (pun indeed…): ’These new spanx are bomb. From target.’

It wasn’t too long after that the post led to social media exploding (see kids, this is how you get free publicity and get richer in the process…) with many taking the reality starlet to task.

Told one commentator: ‘Lmao Kylie just posted a picture on snapchat and you can see her butt pads.’

The undergarment’s ‘rear pockets release for a perky backside,‘ according to the site. Yes kids, I’m wondering what the endorsement $$$$ fee is too…

It’s not the first time that Kylie has shared her secrets with fans (and of course there’s her beauty app too which is said to be on track to make the reality star at least $15 million year over year).

Told Kylie to her fans recently: ‘I don’t share this with a lot of people, but everyone thinks I’ve gotten breast augmentation recently, but I haven’t. I just use the Bombshell by Victoria’s Secret. It’s life-changing. I’ve gotten all my sisters on it and all my friends.’

She added: ‘Clearly, it’s like 10 times bigger – no contouring, no nothing.’

Jenner’s no stranger to controversy when it comes to her body. Earlier this year, fans were doing any and everything to obtain her plump lips. Which of course also turned out to be fake. Like pretty much everything else about her new and improved devolved look. This despite Kylie’s insistence she hasn’t had any plastic surgery.

They are spanx http://t.co/t7i3MYknQt here’s the link if u want some 😉 https://t.co/kvWcSZZC82

@KnowlesMartin I’m actually happy and don’t be calling me an idiot your the one who wastes time on someone you “hate” ?? I feel bad for you