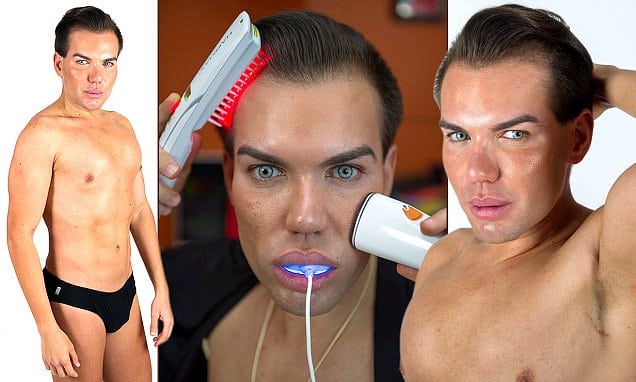 Plastic surgery aficionado Rodrigo Alves, 30 has told of his latest bid to look ever more like idol Ken doll after a new round of plastic surgery investment on top of his already 125 000 pound ($195K USD) investment.

According to the UK’s dailymail the latest round in expenditure makes the UK based flight attendant the first person in the UK to have the procedure, which saw doctors inject stem cells into his scalp.

The procedure took just four hours and now, two months on, Mr Alves says he is seeing the first results.

Told the flight attendant: ‘I started seeing results after two months. I have lots of baby hair coming through – it’s amazing.

‘My hair was really thin and my temple was starting to recede but now it’s coming back in leaps and bounds.

‘Seeing my hair begin to go like that was quite shocking. I was considering going to LA to have a transplant until I found these doctors. I’m getting so many compliments now.

‘The main results are on my temple. I don’t have a receding line anymore, I’m really happy with it all. It was well worth it.’

The procedure, which took place in Miami, began with liposuction on his back to extract fat cells.

Doctors then took 500ml of his blood and blended the two in a special machine before injecting the mixture into his scalp.

The latest treatment is Rodrigo Alves’ 21st and he has had 12 major operations, eight smaller cosmetic procedures and spent more than £125,000 since the age of 20.

He also indulges in twice-yearly Botox and filler top-ups and takes a cocktail of daily pills consisting of collagen tablets, anti-water retention and hair growth tablets.

Mr Alves said he ‘admires’ Barbie’s boyfriend Ken – because the toy looks like the ‘ideal man’.

According to the flight attendant he decided to go under the knife for the first time in 2004 after struggling with his looks since childhood.

As he grew older, Mr Alves realised he didn’t have to put up with his looks – and had his first operation when he moved to London.

‘I just want to present myself in a way I have always wanted to,’ he said. ‘Cosmetic surgery has really changed my life, it was a positive makeover for me. If it wasn’t for cosmetic surgery then I wouldn’t be the man I am today.

‘I’m not trying to reach perfection, I’m just trying to be the best that my body allows me to be. I’m more confident now, I’m better looking and able to present myself in a different way.’

That said it hasn’t all been smooth sailing, with Rodrigo’s attempt at perfection nearly cost him him life when a Brazilian doctor injected a gel into his arms to make them look more muscly.

The 30-year-old was then struck down by a major infection which left him paralysed and unable to feed or wash himself.

After three weeks in hospital with the support of friends and family, he was able to fly back to the UK.

‘I am constantly researching for the best treatments and cosmetic procedures that can make me look better and stop the ageing process,’ he added.

‘I also still use a laser hair comb and many different vitamins and creams in other to improve the skin and hair condition.

‘Thankfully we live in a very modern high-tech society and I believe that now science meet technology and both meet beauty which can be beneficial to many people. It is a constant maintenance process.

‘I receive lots and lots of emails and messages on Facebook from people around the world asking for beauty and cosmetic advice.

‘I want to set an example of positive makeover and break the taboo about cosmetic surgery.’

That said some commentators have wondered about the flight attendant’s ‘fixation’ with plastic surgery with one commentator on the web reflecting:

What’s really sad is that he doesn’t understand that it would have been far more rewarding to get a trainer, exercise, change his diet, all so he could get healthy, and then ultimately learn to love himself for who he is and for the hard work and effort he put into polishing his natural self.