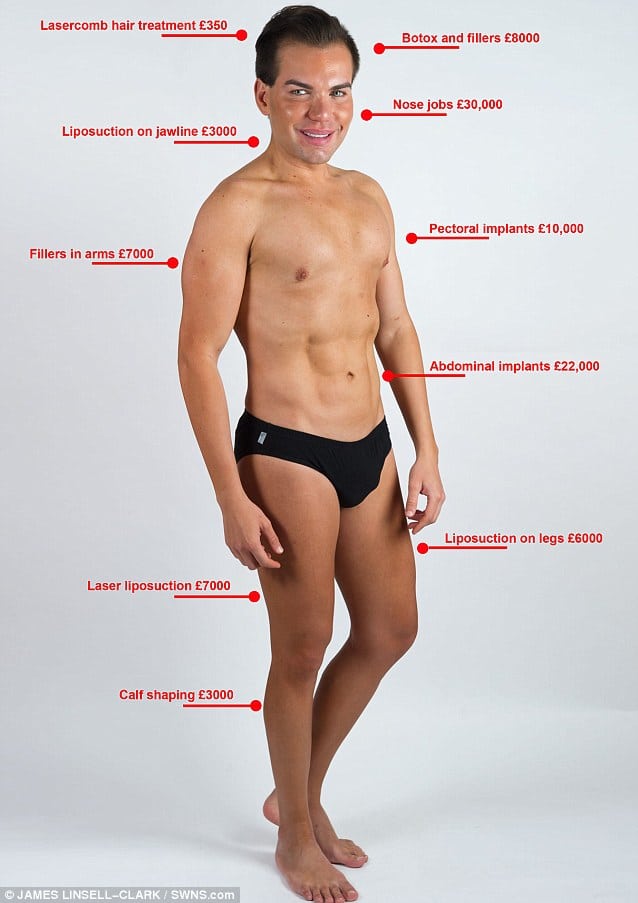 Perfection is in the eye of the beholder, but try telling that to Brazil‘s Rodrigo Alves who has spent over $168K on plastic surgery in a bid to get his version of perfection…

According to Rodrigo Alves it all started ten years ago after he came across an inheritance, which allowed him to change the one thing he really hated about himself- his nose. Hence started a life long ambition to achieve the perfect self.

Told the plastic surgery addict who is following in the steps of America’s infamous Ken doll, Justin Jedlica: ‘I’ve never felt comfortable in my own skin. When I was little I was always teased about my nose by my classmates and my family.’

‘They said it was the biggest nose they’d ever seen.’

He claims that he may never end his quest for the perfect face and body, despite almost dying after a recent procedure went horribly wrong.

Told Rodrigo on a British ITV talk show (see below): ‘Growing up in Brazil I hated the way I looked. I’m a naturally smiley person and my nose would spread all over my face. My family would say: “Where did you get that nose from?”

‘It started with a nose job. And it carried on.I did one nose job and I wasn’t happy with it, so went back for another one. I’m still not happy with it.’

Asked if he had any celebrity role models that he was trying to live up to the flight attendant answered: ‘I just want to enhance and better myself, that’s what I am striving for.‘

‘I tried working out to get the results. I went to the best gym in the country, had personal trainers, but it never worked for me. So I went for the quick fix.’

But lest you think he advises others to follow suit, Rodrigo Alves offers this cautionary warning: ‘‘It’s nothing that I’m proud about and I don’t encourage anybody else to do it either,’ but that hasn’t stopped him from ruling out any future operations, despite the dangers.’

In January, Rodrigo suffered dangerous complications after undergoing a procedure to enhance his biceps, triceps and shoulders with silicone.

The chemical leaked into his system and within days his arms has swelled so much that he couldn’t feed or bathe himself.

Soon he was back in hospital having liters of fluid drained from his body. He was perilously close to death.

At one point doctors told him that one arm might have to be amputated. If the infection caused by the leaking fluid reached his heart he would have died.

After three weeks in hospital with the support of friends and family, Rodrigo recovered and flew back to the UK.

And what’s next for Rodrigo Alves? A fourth nose job of course.

Rodrigo is now being treated for Body Dysmorphia, an anxiety disorder that effects about 1 per cent of the population, he said: ‘I am really hoping that that is going to help me. Help me not to keep changing myself.’

What do you think kids? What is about Rodrigo Alves that Rodrigo Alves is really trying to change and perfect about himself and how much does it really have anything to do with another nose job…? 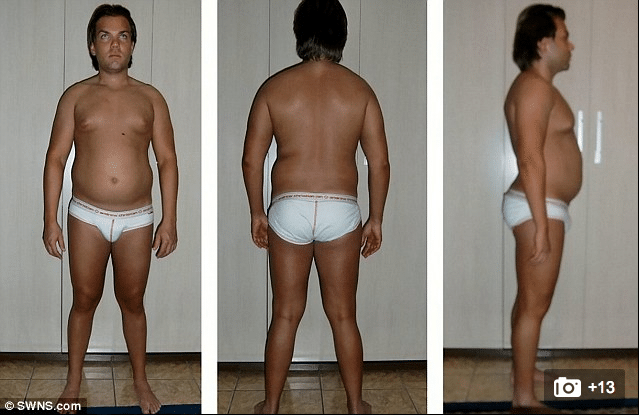