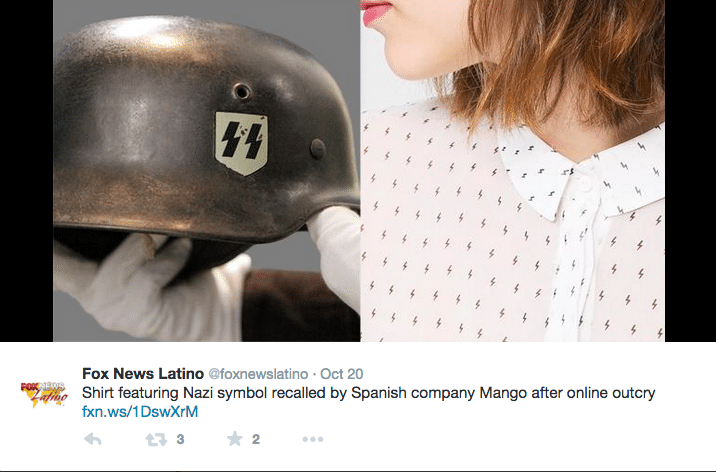 Spanish fashion outlet Mango has come under scrutiny after the apparel maker issued a new shirt replete with tiny black zig zag patterns that some argue are a too obvious reminder of the anti semitic insignia known as siegrune once worn by the Nazi SS, a paramilitary organization during the third Reich.

Despite the outlet apologizing for what it deemed as simply an ‘unfortunate association’ critics, especially those in Germany have continued to take the outlet to task on social media.

Should H&M apologize for its Kurdish female fighter Khaki jumpsuit?

One Twitter user called the shirt an ‘epic #design fail,’ while another branded it ‘Nazi chic’.

Remarked another: ‘After Zara, the SS shirt by Mango,’ referring to an incident in August, when Zara was forced to apologize for selling a striped T-shirt many argued resembled clothes warn by prisoners in Nazi concentration camps.

‘The Spanish have a despicable way to promote brands. Antisemitism sells,’ he continued.

Others, however, were more skeptical of the similarity between the designs. ‘LOL I see it but, really, it’s a shirt,’ offered another social media user.

Told another user: ‘Sorry but what’s going on in your head that you see everywhere Nazi symbols? Hitler is not in Mango but in your heads!’

Said another: ‘Zeus to apologize for thunderbolts.’

Whilst others argued if the shirt is considered offensive, the same could then be said about the band Kiss’s logo, or that of AC/DC.

Mango has since apologized for any offence caused, stating in a release: ‘The RAYO blouse belongs to a collection inspired by mini-motifs. In the range there are two other models which feature hearts and stars.’

That said, there are others, including this author who question why Mango or any outlet should have had to necessarily heed to criticism of their design ware, with shoppers free not to buy said items. Also of consideration is what do we mean by images and who controls or owns any image and if one group of people choose to infer a certain meaning upon an image who is to say others will infer otherwise?

Granted it is one thing to respect the memory of the victims of war but also another thing to respect an individual’s or outlet’s right to express themselves as they see fit and not be beholden to the subjective stances of those who wish to censor ideas or images that they do not find comfortable or approximating their preferred aesthetics. 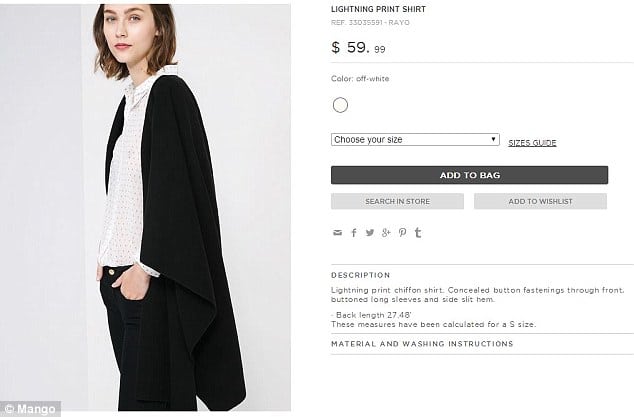