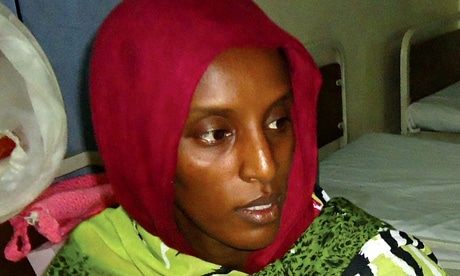 Meriam Ibrahim, the pregnant Sudanese woman sentenced to death for apostasy has this morning been ordered released from death row after growing international outcry.

After state radio had told of the woman’s impending release, the UK’s sky network would in fact report that Ibrahim was indeed now a free woman.

Sentenced to 100 lashes for adultery and set to be hanged for apostasy after refusing to renounce her faith last month, the woman’s case would ultimately come to be an albatross for Sudanese government officials who came to be vilified by the international community.

The decision comes as judges had been hearing an appeal against the woman over  last two weeks, with Meriam Ibrahim’s lawyer,  Elshareef Mohammed,  arguing that the government’s case was based on weak, contradictory and inconsistent claims, and contravened Sudan’s interim constitution.

After being imprisoned with her toddler son, Ibrahim gave birth to a daughter while shackled to the floor of her cell.

The woman’s husband, Daniel Wani at the time had only been permitted brief visits to his family, having told his wife and children were being held in inhumane conditions in Omdurman women’s prison.

Meriam Ibrahim had come to be convicted of apostasy after a Sudanese court insisted she was a Muslim because her father was a Muslim, even though Ibrahim said she had been brought up as a Christian after her father abandoned the family when she was six.

Her 2011 marriage to Daniel Wani, a US citizen was declared invalid, resulting in her conviction for adultery.

After being convicted Ibrahim was given three days to renounce her faith or face a death sentence.

Adding woe to Sudan’s efforts to hold the woman accountable to what it felt was onerous ‘religious transgressions,’ were the efforts of the international community, who sought to apply political pressure to have the woman released, including as the UK’s guardian reports that of Britain’s three main political parties who had come to back a campaign to get Ibrahim released.

UK’s prime minister, David Cameron, had come to tell he was ‘absolutely appalled’ by her sentences. ‘The way she is being treated is barbaric and has no place in today’s world. Religious freedom is an absolute, fundamental human right,’ he said.

The US state department had also told it was ‘deeply disturbed‘ by the case and called on Khartoum to respect the right to freedom of religion.

Safwan Abobaker, an activist who works with religious campaign group Hardwired, which is based in the US, said that the pressure to release Ms Ibrahim had paid off.

Told Safwan via the UK’s dailymail: ‘The Sudanese government was embarrassed by all the attention so they freed her.

‘It’s better for her to come to America now as her half brother said that he would kill her if the court did not carry out the sentence.

‘The Sudanese government needs to protect Meriam and the US embassy in Sudan needs to find a way of bringing her to America quickly.

The initial detention of Ibraim came after ‘a group of men who claim to be Meriam’s relatives’ filed an initial legal action.

The legal action came pursuant to Sudan havig introduced Islamic Shariah law in the early 1980s under the rule of autocrat Jaafar Nimeiri, a move that contributed to the resumption of an insurgency in the mostly animist and Christian south of Sudan.

The south seceded in 2011 to become the world’s newest nation, South Sudan.

It is not known whether the law will be repealed going forward or whether the woman will now choose to leave Sudan, perhaps to live with her husband in the US.