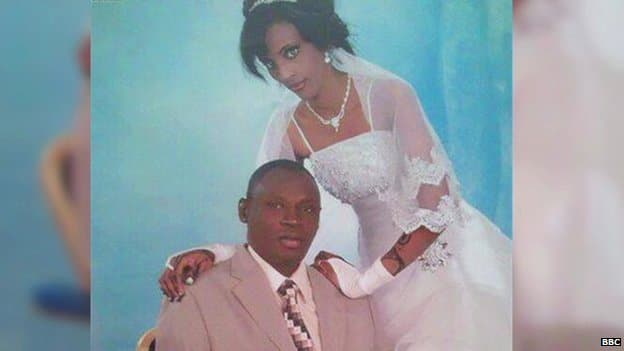 Meriam Ibrahim a pregnant Sudanese woman who married a Christian was yesterday ordered to death by hanging after being found guilty of  ‘apostasy.’ (the abandonment of religion)

According to the Sudanese officials, 26-year-old Meriam Yehya Ibrahim, whose father was Muslim, was convicted on Sunday and given four days to repent and escape death. Her sentencing came after the grace period expired.

Retorted the woman during the hearing: ‘I am a Christian, and I will remain a Christian.’

Meriam Ibrahim was born to a Sudanese Muslim father and an Ethiopian Orthodox mother. Her father left when she was 6 years old, and Ibrahim was raised by her mother as a Christian.

During yesterday’s sentencing hearing, a sheikh told the court ‘how dangerous a crime like this is to Islam and the Islamic community,’ said attorney Mohamed Jar Elnabi, who’s representing Ibrahim.

The case, told the woman’s lawyer started after Ibrahim’s brother filed a complaint against her, alleging that she had gone missing for several years and that her family was shocked to find she had married a Christian man.

The BBC reported the woman’s death by hanging will not be carried out until two years after the birth of her child.

The sentencing has elicited condemnation from Western embassies in the Sudanese capital, Khartoum, and international rights groups, including Amnesty International.

The rights group reported the woman is eight months pregnant.

The woman was also ordered to be given 100 lashes for committing “zena” — an Arabic word for illegitimate sex — for having sexual relations with a non-Muslim man.

The couple married in 2011 and have a child, born 18 months ago. Under Sudanese law, Ibrahim’s marriage to a non-Muslim is regarded as void.

Offered the woman’s husband, Daniel Wani upon the issuing of the sentence: ‘I’m so frustrated. I don’t know what to do,’

Court officials had blocked him from entering yesterday’s hearing.

Ibrahim can appeal her death sentence as well as the 100 lashes.

As in many Muslim nations, Muslim women in Sudan are prohibited from marrying non-Muslims, though Muslim men can marry outside their faith. By law, children must follow their father’s religion.

Told the human rights group in a statement: ‘The fact that a woman has been sentenced to death for her religious choice, and to flogging for being married to a man of an allegedly different religion is appalling and abhorrent,’

‘Adultery and apostasy are acts which should not be considered crimes at all.’

The group has called for Meriam Ibrahim’s immediate and unconditional release.

Sudan introduced Islamic Sharia laws in the early 1980s, a move that contributed to the resumption of an insurgency in the mostly animist and Christian south of Sudan. An earlier round of civil war lasted 17 years and ended in 1972. The south seceded in 2011 to become the world’s newest nation, South Sudan.

Attempts to contact Sudan’s justice minister and foreign affairs minister about the Ibrahim case were unsuccessful.

Sudan is one of the most difficult countries in the world to be a Christian, according to international religious freedom monitors.

Sudan’s current ruler, Omar Bashir, is an Islamist who seized power in a 1989 coup.