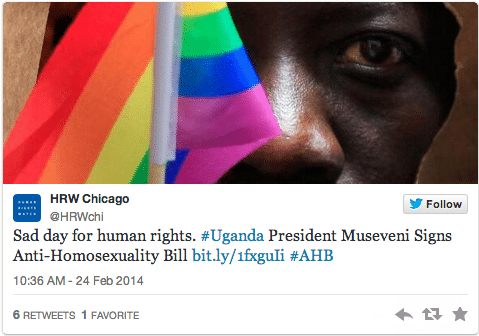 Uganda‘s President Yoweri Museveni despite human rights interventions vocal opposition has today signed off on the nations anti gay legislation that has made being homosexual a crime.

The signing came as a government spokesman told President Yoweri Museveni wanted to assert Uganda’s ‘independence in the face of Western pressure.’

Uganda anti gay bill leads to boycott from Europe. Is US next?

The bill ratified in December, is popular in Uganda, but rights groups have condemned it as draconian in a country where homosexuality is already illegal.

The law punishes first-time offenders with 14 years in jail. It also sets life imprisonment as the penalty for acts of ‘aggravated homosexuality.’

Define aggravated homosexuality in the face of aggravated legislation.

Aggravated homosexuality would come to include repeated sex among consenting adults as well as sex acts involving minors or a partner infected with HIV.

The bill originally proposed the death penalty for some homosexual acts, but that was later removed amid international criticism.

Reacting to international pressure to not sign off on the bill, Museveni told: ‘Africans do not seek to impose their views on anybody,’

‘We do not want anybody to impose their views on us. This very debate was provoked by Western groups who come to our schools and try to recruit children into homosexuality. It is better to limit the damage rather than exacerbate it.’

Interestingly the bill has been championed by Christian clerics and politicians in Uganda who say it is necessary to deter Western homosexuals from ‘recruiting’ Ugandan children.

The bill’s author, David Bhati, has maintained that this law is about protecting children.

Challenged gawker:  Rather, it’s also about a president who’s been in office for 28 years using an already powerless group of people as a sign of resistance to the deviance of western culture (even though anti-gay sentiment in Uganda was stoked in part by American evangelist Scott Lively).

It’s about a willful misunderstanding of what it means to be gay. It’s about fabricating an enemy that is looming to corrupt moral values and the legitimacy of a patriarchal society.

Reiterated the observer:  The president suggested he could not to understand how men could fail to be attracted to Uganda’s beautiful women and, instead, get attracted to fellow men.

Some Ugandan gays say the measure was orchestrated in 2009 by U.S. evangelicals who wanted to spread their anti-gay agenda in Africa.

Pepe Julian Onziema, a prominent Ugandan gay activist, told on Friday that he will challenge the legislation in court after the president signs it.

Presidential spokeswoman Sarah Kagingo said that ‘activists do not determine how the president runs the country.’

Earlier this month, President Obama warned that the signing of this bill would “complicate” the U.S.’s relationship with Uganda.

Obama and the West should now accept the reality that homosexuality is not easy to sell in Africa, just as polygamy is not in USA and the West. It is not the end of the World if homosexuality is not considered a Human Right in some societies. Meanwhile , homosexuals can go on doing their thing in private as some polygamists, weed-smokers or prostitutes do in those Western cauntries where these things are forbidden by law.

Lets us move on to other more important things such as getting rid of Musevenism.

that is exactly I don’t blame M7 for manipulating things around him & keeping him self in power.

YES!! Just another one from Mzee that i have liked. You stood up to the Western world and its evils. MP Bahati, you are the man. You deserve a pat on the back.