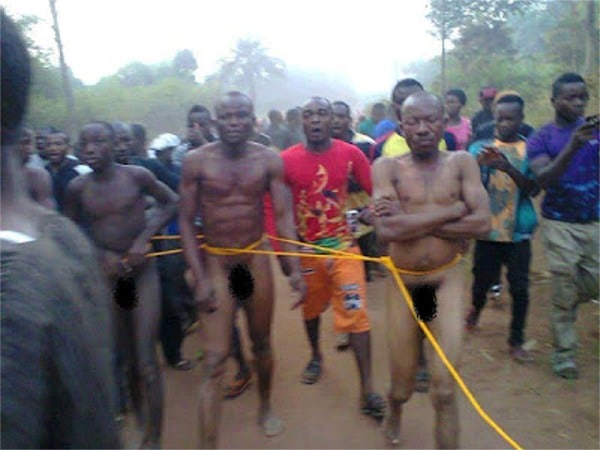 Woe to be gay in Nigeria, where local mobs have now taken to physically rounding up ‘known’ gay individuals or sympathizers, parading them collectively with threads of bright string like the ‘vermin’ that they are. This after all is how we deal with cultural and religious prejudice- we vilify and then discard.

Since been rounded up by Islamic religious groups in Northern regions of Nigeria in recent days, gay men have been herded off to trial in which they are made to atone for their blasphemy. Specialized punishment includes public stoning,  beatings, public shaming and now mandatory jail sentences, which were recently passed, with maximum sentences up to 14 years.

Told Jessica Stern,  Executive Director of the International Gay and Lesbian Human Rights Commission (IGLHRC): ‘We have been notified that 10 men, suspected to be gay, were rounded up and beaten last night in the town of Geshiri, near Abuja, by a mob of about 40 people.’

Five of the men rounded up were taken to police stations and detained before eventually being released. Released one supposes on the condition that they quickly pack their bags and leave the community.

Reports gaystarnews: Another source in the village reports 12 people were attacked and indicates the mob was about 40 people strong.

It is believed four gay men were taken into custody and eventually moved to Mabushi district police station where they were interrogated about their sexuality in a derogatory way.

However a senior officer there intervened, reportedly telling the Gishiri police they should have intervened earlier for the men’s safety.

The same officer gave the LGBTI people 48 hours to leave Gishiri for their own safety, providing them with an emergency number in the mean time.

The GSN source reports: ‘While that was happening, the villagers were going to houses painting “homosexuals must leave” on the walls.’

Since the imposition of a new law criminalizing homosexuality, Nigerian President Goodluck Jonathan‘s office says 90% of the country’s 170 million people ‘detest’ homosexuality, and agree with the new law.

Told Associated Press: ‘A person who registers, operates or participates in gay clubs, societies or organizations, or directly or indirectly makes public show of same-sex amorous relationship in Nigeria, commits an offense and is liable on conviction to a term of 10 years.’

Since the passing of the new law last month, and the outbreak of public witch hunts of same sex individuals many of Nigeria’s gays and lesbians have gone into hiding, in fear that they too will be rounded up, paraded and brought to trial for the crime of their sexuality.