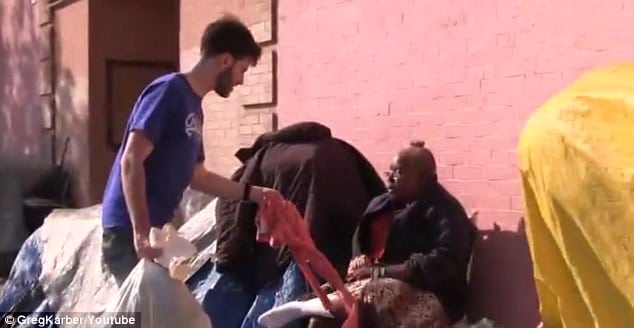 Los Angeles filmmaker, Greg Karber has sought revenge on fashion label Abercrombie and Fitch by passing out token items to the homeless. His rationale? He’s sick of the label extolling that only the ‘thin and beautiful’ can ever wear the label’s clothes.

The response came about after the film maker read reports alleging that the company safeguards its image by destroying unsold clothing rather than donating to those in need.

His missive ‘Fitch the Homeless‘ is in his own words designed to ‘change the brand.’

Told one manager anonymously one time:

“Abercrombie and Fitch don’t want to create the image that just anybody, poor people, can wear their clothing. Only people of a certain stature are able to purchase and wear the company name.”

The film maker’s effort comes after a report which saw Abercrombie and Fitch last week receive wide flack after a report told how the label doesn’t make its women’s wear above large,or pants above a size ten. In essence excluding plus size customers,one supposes in an attempt to reinforce a cool and thin and hip attitude. Which may in the end be what so often helps sell a label.

‘He doesn’t want his core customers to see people who aren’t as hot as them wearing his clothing,’ Mr Lewis added. ‘People who wear his clothing should feel like they’re one of the “cool kids.”‘

The UK’s dailymail goes on to note other instances in which the outlet has been the recipient of media scrutiny:

While Abercrombie & Fitch offers men’s sizes in XXL, Mr Lewis believes this is to appeal to muscular football players and wrestlers.

In 2004, the company was sued for giving positions to white applicants, to the exclusion of minorities; and in June 2009, British student Riam Dean, who was born without a left forearm, won approximately $12,000 in an employment tribunal.

And what does Abercrombie and Fitch’s CEO, Mike Jeffries have to say all about this?

‘We go after the cool kids. We go after the attractive all-American kid with a great attitude and a lot of friends. A lot of people don’t belong [in our clothes], and they can’t belong. Are we exclusionary? Absolutely.’

He also went on to add the following:

‘Those companies that are in trouble are trying to target everybody: young, old, fat, skinny. But then you become totally vanilla. You don’t alienate anybody, but you don’t excite anybody, either.’

In the end one supposes Abercrombie and Fitch are entitled to do as they please and set the type of benchmark that they aspire to even if many of you out there may see the company in a whole new contemptuous light. Not that the company doesn’t have dollops of contempt for those of you who it judges doesn’t make the grade, which paradoxically ought to keep you all rushing to buy its products. Or will it?