Are you a hawt enough bixch for Abercrombie & Fitch CEO Michael Jeffries?

It’s long being known that Abercrombie & Fitch CEO Michael Jeffries has a very particular look he wishes to replicate at all A & F stores, (buff, hot, half naked and pretty boy clean) but it has now become apparent the CEO extends that mandate when his employees are chosen to accompany him on his private plane.

Reports the dailymail: According to a 47-page ‘aircraft standards’ manual, male flight crew on board his private Gulfstream G550 jet, were required to be clean shaven and wear Abercrombie boxer briefs, polo shirts, jeans, flip flops and ‘spritz’ the retailer’s cologne at regular intervals.

They were also required to act a certain way and say certain things, even towards Jeffries’ dogs, according to an age discrimination lawsuit brought by a former pilot who claims he was replaced by a younger model.

Kids do you get the impression that Jeffries who is proudly gay is the modern day equivalent of Caligula who demands you his royal subject appropriate yourself in a way befitting that of a servile but of course well hung gladiator boy that can be fed to the lions if they don’t behave?

Other meticulous details in the manual allegedly include that toilet paper must not be ‘exposed’ and its end square should not be folded. Washcloths – of which there should be eight – should be tri-folded.

Stewards must wear black gloves when handling silverware and white for laying the table and should reply ‘no problem’, rather than ‘sure’ when asked to do anything by either Jeffries, 68, or his boyfriend Matthew Smith.

Staff must also wear sunglasses and they are banned from wearing coats unless the temperature falls below 50F.

Black gloves when handling silverware? Reply ‘no problem your highness?’ ‘Sure how high do you want me to jump,’ when Jeffries or his love hustle beckons you forth? Kids where’s the part that requires you to put on torn stockings when Jeffries or his hawt bixch Smith whisper come hither and slap them to the beat of Donna Summer‘s ‘I feel love’ in the background?

And then there’s this too, because of course ambience is everything:

They must also arrange fresh flowers and serve the 68-year-old Assam tea in the morning but Darjeeling after 2pm.

On flights longer than two hours, crew members may have a meal — but ‘if the passengers are eating cold food, crew members are not to eat hot meals’. The meal must also not be ‘aromatic’.

But of course I spared the best part for last:

Carpets are to be vacuumed in perfectly straight lines, there are to be no fingerprints anywhere in the cabin and the crew are also required to play Phil Collins’ Take Me Home as the jet takes off on homeward bound flights.

Kids personally if it was me that was hiring those hung gladiator boys I’d make sure to permanently file away their fingerprints so as to not to have to bother with gloves and inconvenient shit like that. And with respect to Phil Collins, bixch should really stick to Donna Summer of for the days when there’s real turbulence this hawt bixch.

The above comes courtesy of a federal age discrimination lawsuit filed in 2010 by former pilot Michael Stephen Bustin, now 55 who reckons he was fired and replaced by a younger prettier bixch.

The original complaint stated: ‘Smith and Jeffries made disparaging and exclusionary comments about older individuals and made it clear to [Bustin] that [Abercrombie & Fitch] preferred younger people as employees, in keeping with its “young” corporate image.’

To date A&F’s general counsel, Rocky Robins has said that Bustin’s claims are without merit, having at present declined to comment on the rule book. Can anyone guess why? 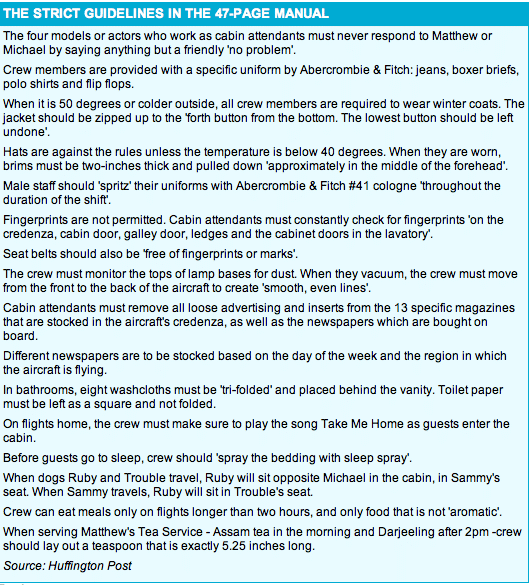