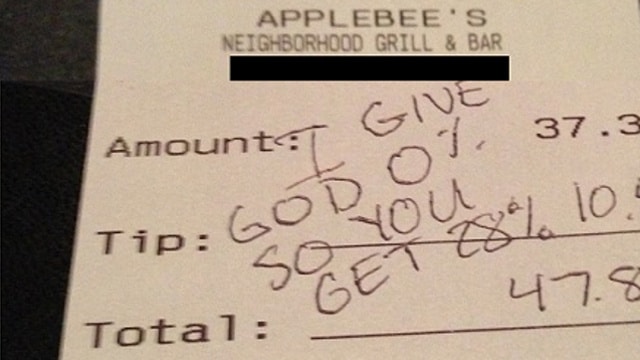 Alas God is not in a forgiving mood as the storm over the waitress, Chelsea Welch who was fired by Applebee’s after she posted snide comments on her tip receipt courtesy of recalcitrant diner Pastor Alois Bell.

By now with the web going in overload reaction (see the 600 comments plus mounting here from our earlier article) after Chelsea ended up getting fired after Pastor Alois Bell called the outlet to complain further (God is just not in a good mood this week kids….blah) Applebee’s it seems has been forced to reckon with the tide of commentators who reckon that if anyone is to blame it sure isn’t Chelsea but god Pastor Alois Bell herself.

We appreciate the chance to explain our franchisee’s action in this unfortunate situation.

Please let us assure you that Applebee’s and every one of our franchisees values our hard working team members and the amazing job they do serving our guests. We recognize the extraordinary effort required and the tremendous contribution they make, and appreciate your recognition and support of our colleagues.

At the same time, as we know you will agree, the guests who visit Applebee’s — people like you — expect and deserve to be treated with professionalism and care in everything we do. That is a universal standard in the hospitality business. That includes respecting and protecting the privacy of every guest, which is why our franchisees who own and operate Applebee’s have strict policies to protect personal information — even guest’s names.

With that in mind, here is what happened in St. Louis:

– A guest questioned the tip automatically attached to her large party’s bill by writing: “I give God 10%. Why do you get 18?” on the check.
– A different server, who did not even wait on the group, photographed the receipt, posted the photo online and commented about the incident.
– The guest subsequently heard from friends who identified her from the posting, where her name is clearly visible, and the restaurant was notified. There was no further communication with the guest.
– The team member was asked about posting the receipt and admitted she was responsible.
– When she was hired, the team member was provided the franchisee’s employee hand book which includes their social media policy and states:
“Employees must honor the privacy rights of APPLEBEE’s and its employees by seeking permission before writing about or displaying internal APPLEBEE’S happenings that might be
considered to be a breach of privacy and confidentiality. This shall include, but not be limited to, posting of photographs, video, or audio of APPLEBEE’S employees or its customers,
suppliers, agents or competitors, without first obtaining written approval from the Vice President of Operations. The policy goes on to specify: Employees who violate this policy will be subject to disciplinary action, up to and including termination of employment.
– As a result of her admission to violating a clear company policy intended to safeguard guests, the team member is no longer employed by the franchisee.

Our franchisees are committed to acting in the best interests of guests and team members. This is a regrettable situation and we wish it had never happened. However, the disregard for an important policy left the franchisee no choice but to take the action they did.

We hope this provides you with some additional insight. Thanks for giving us the opportunity to explain the facts involved.

Nonetheless many did not necessarily take too kindly to Applebee’s interpretation of events.

Really? Seriously? Shame on you, Applebees.

Applebee’s should just suck it up say they made a mistake (kind of like that pastor should have done) and beg for forgiveness. No matter what spin you put on it you are going to lose. There are way too many people who are against you and the pastor and this story will pass around for a while. Then someone will do a follow up story and it will start all over again.

And these are just the polite comments kids…

Speaking with Consumerist yesterday, Welch said she checked the employee handbook to make sure she “didn’t break any specific guidelines.”

But in its statement, Applebee’s disputes this, saying Welch violated the company’s social media policy, which states: “Employees must honor the privacy rights of APPLEBEE’s and its employees by seeking permission before writing about or displaying internal APPLEBEE’S happenings that might be considered to be a breach of privacy and confidentiality.”

The policy does not specifically refer to receipts, only to “photographs, video, or audio” of employees, customers, suppliers, agents, or competitors. Additionally, “permission” is defined as “written approval from the Vice President of Operations.”

The punishment for violating this policy is “disciplinary action, up to and including termination of employment.”

Honor the customer but not honor the employee’s need to make an honest living?

So much for capitalism and a Pastor who uses the tithe of her faith to pull in muscle and rank at the expense of an Applebee’s employee.

Will you be filing for a job at Applebee’s anytime soon kids?