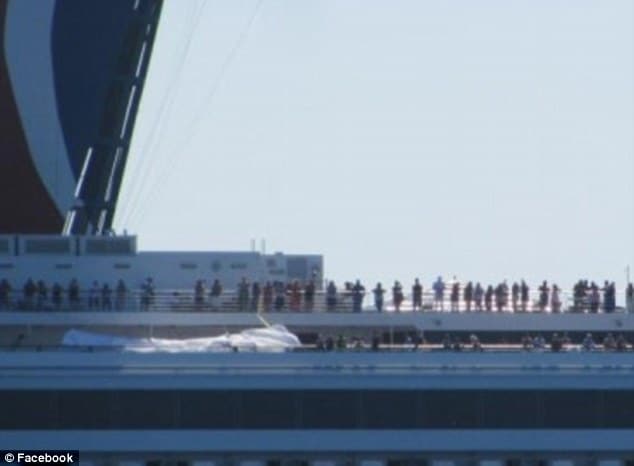 Photos: Carnival cruise is officially covered in shit and piss and puke.

According to relatives accounts their loved ones who have had the misfortune of being stuck on Carnival cruise liner off the coast of the Gulf of Mexico are now at their breaking point.

Accounts tell of passengers being forced to pee in plastic bags and many simply throwing up relentlessly on account of the noxious smell of raw sewage clogging the liner as engines have cut out since last Sunday and tug boats desperately tug the liner back to shore.

The havoc on the embittered liner is said to be having the most consequences on children and the elderly but as of yet there have been no reports of any serious life threatening illnesses.

Tells the UK’s dailymail: One passenger, Anne Barlow, sent a text message from on board saying that less able passengers were ‘struggling’, the smell was ‘gross’ and her room was leaking sewage.

Some of the people on board reported that cabin carpets are soaked in urine, passengers are sleeping in tents on deck and scarce food supplies that has reduced them to eating cold onion sandwiches.

Vacationers were fighting over food, elderly people running out of medications and formula and diaper supplies were limited for babies, according to some reports.

Recalled passenger Debra Rightmire, who texted ABC: ‘Conditions are getting worse by the hour. Cabin carpets are wet with urine and water.

‘Toilets are overflowing in the cabins, we are having to sleep in the hallways. Onion and cucumber sandwiches last night.’

Another Donna Gutzman wrote: ‘There’s no lights, no water, we can’t flush. Some people were able to shower.’

Offered Jay Herring, a former senior officer for Carnival Cruise Lines, one of the biggest concerns crew members will have until the ship docks is the potential for disease outbreak, particularly norovirus, which causes vomiting and diarrhea.

‘Housekeeping, others are probably working double shifts to keep the mess clean and wipe down and sanitize all the common areas.’

Carnival Cruises CEO Gerry Cahill reassured families on Tuesday that it is making passengers stranded on the  ship as comfortable as possible with running water and some working bathrooms – contradicting the accounts of passengers who told relatives of filthy, hot conditions and eating cold onion sandwiches.

The Carnival Triumph, which is carrying 4,200 passengers and crew, is expected to dock on Thursday afternoon – weather permitting.

The National Transportation Safety Board announced Tuesday it has opened an investigation into the cause of the fire. The NTSB said the Bahamas Maritime Agency will lead the investigation because the ship carries a Bahamian flag.

The company says passengers will be fully refunded and get discounts on future cruises.