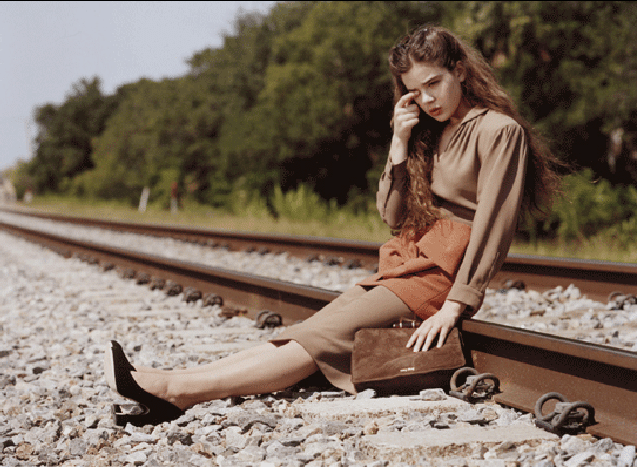 Has Britain’s Advertising Standards Authority over stepped its boundaries in banning the latest ad for fashion house Miu Miu? Seems no one is quite sure.

Unlike recent ads that have been banned by the board, this time there is no suggestive posing,pedophilia, intimation of drug use or the use of emaciated model but that hasn’t stopped the board from demanding that Miu Miu take off its latest ad of a young woman sitting on a railway line.

Remarked styleite: ‘…because it depicts a child in an unsafe position.’ and then this: “could have easily moved from where she was sitting because she was not restrained in any way.’

Yet a careful regard of the image reveals something more. A young woman apparently distressed (she is crying after all) sitting on the railway track. What are we to think of this? Do most young women sit on railway tracks crying? Or how about girls who are prone to attempts on their life? That wouldn’t too far from the mark would it?

What makes the ad beguiling is the fashionable sensibility and decorum of the young woman sitting on the track- which is to intimate no matter how down and out one is one can still look glamorous. That is after all the consistent draw of fashion advertising of late- to portend to the idea of the unsafe, exotic, strange, diabolical because for some reason fashion retailers have decided this is what sells clothes.

Sells clothes as well as foster the tolerance of the too edgy and unsafe, something that the advertising board isn’t willing to publicly endorse despite the fact that this femme fatale cuts a dashing figure with the faintest hint of something untoward impending. Perhaps too fashion forward after all?

There’s something dodgy about Dakota …