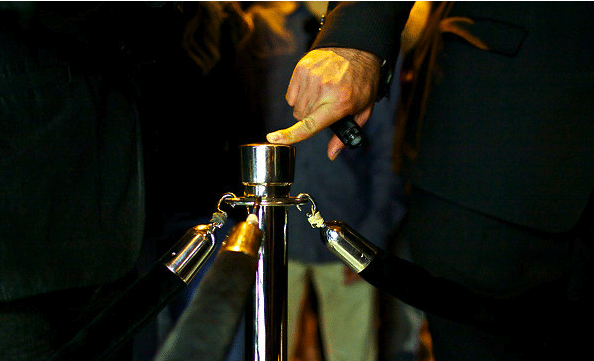 Being fabulous just got much harder.

Oh woe to all those of you who aspired to be the hot bitches of every party cause them publicists that know and like to keep you on your feet have come up with a new way to keep you begging. Begging to be let past the velvet rope, but unknown to you they’ve developed a home made recipe from which to gauge your importance and cool factor. Score high on Klout (yes that’s what they’re calling your new nightmare) and you get past the door trinket boy and straight to supposed nirvana cause it’s been estimated you’re worth it.

So the critical question arises, what are the Klout factors comprised of? Well don’t expect Klout to tell you (that would of course defeat the purpose of them existing), but one clue according to the nyt’s is what they deem your social media status to be. What? But I’m society, the son of so and so and vacation haute couture, and then of course I went to Spencer before parading myself off to Princeton and I do have a smashing three quarter profile angle! Please let me in…

IN September, during a Fashion’s Night Out event in the upscale Miami neighborhood of Bal Harbour, guests decked out in Marc Jacobs and Herve Leger could not help but notice a separate velvet-roped V.I.P. area. There, a privileged few shared one denominator: each guest had accumulated a Klout score above 40.

“You had all these fashionistas who felt very highly about themselves,” observed Gerard Bush, creative director of the BRPR group, the event’s orchestrator. “They were well-heeled and well-connected, and quite annoyed at being excluded; but they wield little influence in the social media space.”

Kids, as you can imagine the tears are flooding down my face! Them bitches keeping you all out of what is rightfully yours.

The Bal Harbour organizers were not alone in using Klout, a Web site that rates social media influence on a scale of 1 to 100, as a means of determining V.I.P. status.

When the Gansevoort Park Avenue in Manhattan held a series of Sunday rooftop parties this summer, some of the hotel’s attendees were culled from Klout’s highest rankers; the entrepreneur Peter Shankman turned to Klout for a party he held at the Hudson Hotel with JetBlue; and the fashion stylist Lauren Rae Levy demanded a score of 50 or above for bloggers on her invitation list to the Malan Breton show at Lincoln Center.

Lauren Rae Levy? Ahh yes why does that name ring a bell? Ahh, that’s because I’ve only written about her half a bunch of times about her being fabulous and what not (never mind what all you other bloggers have written…). So the more bloggers you know the better off you will be. Good going Lauren. I know I still adore, see your klout score just went up 75 000 %.

Public relations companies are also beginning to consult the site. “Just because people throw up blogs in their spare time to express how they feel about neon colors this season does not mean they deserve to sit at a show that costs a hundred thousand dollars to produce,” said Alison Brod, whose firm represents fashion and beauty clients. “Klout helps us sift through the hordes of bloggers.”

Alison Brod? Where do I know that name? Oh yes I remember now, she was the publicist who made my photographer and writer wait outside one fashion show outing whilst the show went on without them. Of course I wrote a delicious article documenting the less than stellar behavior of Alison Brod’s assistants before being met with a lawsuit threat if I refused to recant my article. Hmm, yes I remember Alison very well. Kids when Alison tells you better rank high on her home made ‘made for success and fabulous’ guest list you better work out how to get there. Me thinks sucking up to lots of bloggers or better still hiring Alison publicists will see you in the right direction.

But the there’s this caveat:

High scores may be a foot in the door, but that may be it. Richie Notar, a partner at Nobu, said he was more inclined to give a table to a person with a high score. “I would make him my new best friend and make an effort to please him,” he said. “But if the person was rude or didn’t behave in a way we appreciated — game over.”

Game over? Please, I’m willing to bet behaving like a boor and brat will soon get you ranked even higher on the klout score of being uber fabulous and desirable.

Anyone want to hire a maladjusted blogger to blog about you? ps My klout score is 16 (so I guess I fail pretty miserably, oh well bixches…)

The continued misbehavior of NYC publicists.

The dizzy and nasty rise of the NY Publicist…Welcome Alison Brod.

SHOULD A WRITER JUST GIVE UP AND BECOME A SOCIALITE INSTEAD?

AND SO IT CONTINUES- DARREN BETTENCOURT INSISTS HIS CLIENT JILL ZARIN IS NOT A MEDIA WHORE.

THE DECEITFUL TRICKS OF PSEUDO CELEBRITIES.