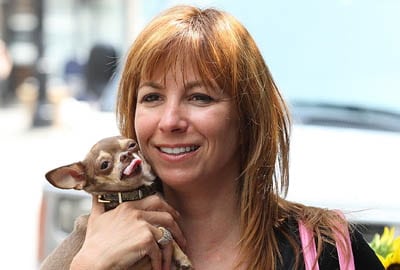 Media whores. That’s one mouthful of a word, well strictly speaking 2 mouthfuls but that hasn’t stopped publicist Darren Bettencourt who has single handedly (along with a bit of help from Jill herself) propelled Jill Zarin to media omnipresence from claiming that he had nothing to do with the recent fiasco this past Sunday at chic upper East Side eatery GIRASOLE where a phalanx of paparazzi were sent on behalf of his client to stage her dramatic entry and of course her ever present relevancy to the American public. Yes we are chaffing at the bit too…

Upon our article being released the next morning disclosing the mass email made to a variety of paparazzi editors (yes kids, they even had the gall to reach out to me) in an effort to secure cunning placement of tabloid bobo’s a strewn of emails began to fly in this direction. Emails to the effect that there must have been a mistake because Jill Zarin is not a media whore and it never occurred to her or her publicist, Mr Bettencourt to curry a late afternoon phalanx of tabloid bobo’s who would be coincidentally waiting for Jill and her espoused friend primadonna Countess LuAnn as they gallantly entered GIRASOLE.

The initial mass email as it appeared is below: 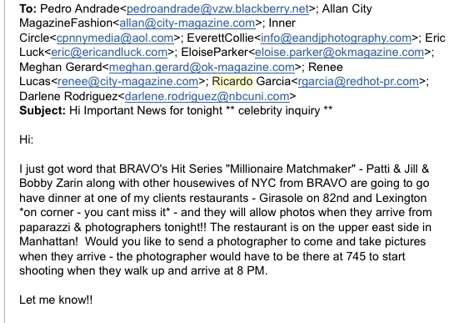 Which begs the question, if Mr Bettencourt didn’t authorize it, who did? Well we do know who sent it out but have decided to keep that our secret unless if Darren feels obliged to disclose it. But frankly Mr Bettencourt do you suppose us to be that naive in lieu of Jill Zarin’s meteoric rise to media whoredom at your hands that you had narely a whiff of the paparazzi coming your way? Because if we know one thing about publicists, they know to the very moment a flashbulb clicks who is on their way. But really inviting stray photographers would of have probably done the trick too.