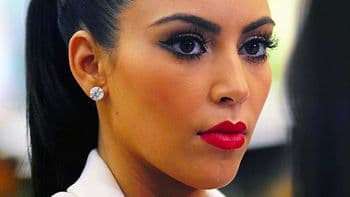 Source claims that Kim Kardashian’s marriage was arranged and that she hated making out with Kris Humphries.»

The Kim Kardashian parasitic business of money grabbing and how we fell for it.

72 days of marital bliss and 17 million dollars pocketed. The bitter tears of a media whore…

Kids before I even type another word I have to confess the chipmunks Fyodor and Mazeltov whom when they’re not watching back to back reruns of ‘Keeping up with Kim the Media Whore,’  like to spend their days smoking wide swaths of the good shit under the safety of the kitchen cupboard (yes we have very nosy neighbors) have just sent SOS signals to the local opiate dealer because even they are crumbling under the weight of the latest setback in the life of our collective sweetness Kim Kardashian.

The chipmunk’s tears began pouring earlier this morning when E! news douche Ryan Seacrest (oh well…) announced that our highness Kimby was filing for divorce later that morning. Never mind she was seen partying it up with another as of yet disclosed hunk in NYC this weekend, because that after all is how one finds the courage to announce on a Monday morning that love don’t live here anymore.

Instead of filing for an annulment (why bother publicly admitting it was a sham in the first place?) our highness will instead cite “irreconcilable differences,” from her soon to be dumbfounded (you bet) ex husband Kris I thought I had it made but maybe there’s still a chance to shop my own media whore reality show of how I like to bang telegenic d listed femme fatales’ Humphries.

According to various media sources, the couple’s relationship  in recent weeks was said to to on the rocks. Which is another way of saying them bixches were already in the back barn counting the dollar bills that Kimby worked her ass pimples so hard to command this summer’s ‘let’s give them another dose of make-believe,’ all time bonanza.

But lest you bixches start fretting that Kris I only kiss when I am being paid in front of the TV camera is gonna get his hands on all of Kimby’s hard-earned money, the two conveniently signed a pre nup agreement before waltzing down a made for TV wet dream bridal bonanza. Never mind that media milkers E! network (yes the same outlet that had Ryan get out of bed this morning to peddle the latest made to order script) paid our collective darlings Kimby and Kris a cool $17 million to make a mockery of us.

One day deep in the future when Kimby is making love eyes to her soon to be new money bags husband she will do a few quick math calculations before slightly parting her lips to let the Benjamin bills frolic the back of her tonsils. Such it seems is the allure of love and lust in a world where love always tastes better when it’s heavily scented with a money back guarantee.

If only the chipmunks could find deep meaningful love as well…