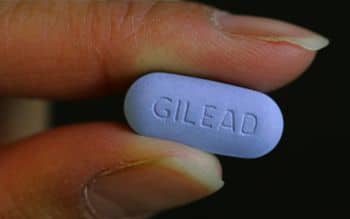 AP: The first of the new studies, run by the CDC, involved more than 1,200 men and women in Botswana. About half got a daily pill, Truvada, an HIV treatment made by Gilead Sciences Inc. The other half got a fake pill.

An analysis of people who were believed to be regularly taking the pills found four of those on Truvada became infected with HIV, compared with 19 on the dummy pill. That means the real drug lowered the risk of infection by roughly 78%, researchers said.

I remember when the news first broke about Truvada, prompting many discussion as how exactly these studies work.  When people are chosen as test subjects, are they in someway encouraged to engage in high-risk behaviors so they test the pill’s effectiveness?

The second study responds to those queries:

The second study was funded by the Bill & Melinda Gates Foundation and run by the University of Washington. It involved more than 4,700 heterosexual couples in Kenya and Uganda. In each couple, one partner had HIV and the other did not. The uninfected were given either daily placebos, Truvada pills, or another Gilead treatment, Viread.

The study found 13 HIV infections among those on Truvada, 18 in those on Viread, and 47 of those on dummy pills. So the medications reduced the risk of HIV infection by 62% to 73%, the researchers said.

A study in April showed no benefit for women taking Truvada in Tanzania, South Africa, and Kenya, but researchers are still piecing together what happened then. (speculation exists that the females weren’t taken them often enough, but wouldn’t that statistical error also translate to men supposedly taking the pill as well?)

Now, even the control groups are being given the real pill instead of a placebo, and Gilhead is producing a generic, affordable version. This a result of ethical concerns given the observed effects on this individuals receiving Gilead’s Truvada as opposed to the placebo.

I have a nagging suspicion that once this drug is in rotation and widely available, there will be another sexual revolution and gay sex will be restored to its former glory.  However, the drug should go to where it is most needed: countries in Africa ravaged by HIV/AIDS should definitely receive its benefits before the more decadent circles get a hold of it.

Either way, studies sound encouraging.  Next stop: a cure?