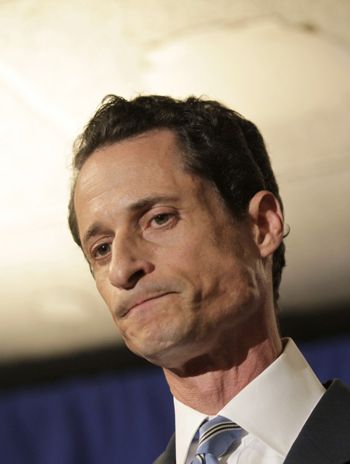 Another politician bites the dust.

‘It was never meant to be,’ might be the adage that one can use pursuant to Anthony Weiner offering his immediate resignation this afternoon amongst hecklers at a press conference.This coming a week after the congressman insisted he had not had inappropriate online relationships, later recanting to admit that he indeed had had such relationships and that netherless he would not be resigning. Which is to say, this week has probably been the longest one Mr Weiner has ever had to face after having suddenly become the parriah of the Democratic party who were all too quick to push him out the back front door.

huffpo: Today I am announcing my resignation from congress so my colleagues can get back to work, my neighbors can choose a new representative, and most importantly, that my wife and I can continue to heal from the damage I have caused.” The pair married less than a year ago, in July 2010.

Although some argue had Mr Weiner instead of lying and covering up his actions admitted from the outset to his indiscretions he may have saved himself from public persecution and ridicule. Something that may have exacerbated the disillusionment many felt within the Democratic party who could no longer stand by and support what by now had degenerated into a 3 act pony show, with Mr Weiner playing the starring role of a half naked bleating pony, with the media co starring as the twichy whipping boy.

At present Mr Weiner has offered no clues as to what is next except to say he intends to do everything to save his marriage to Huma Abedin.

All of which makes us wonder, how much responsibility does a politician owe the public when it comes to revealing what s/he does behind closed doors? Or to take it a step further how much does anyone need to let others know what they are up to in their private time (assuming of course they are not using public forums such as tweeter as Mr Weiner was)?

So much for positions in public office.

Anthony Weiner’s wife returns only to find him doled up in lube oil and a panty hose.

Anthony Weiner finally wants to show you his erection.