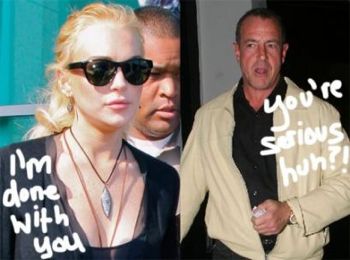 Kids, me and the chipmunks have just spent the last 8 hours looking for our best neck ties in preparation of the imminent debut of reality junkie Michael Lohan on the much ballyhooed program ‘Celebrity Promotional Rehab.’ Of course, there’s one person who want be sharing our joy. Who you wonder? Let’s take a look under the floor where we keep our crack pipe.

perezhilton: Lindsay Lohan has released an official statement publicly condemning her father’s behavior and opinions shared in the press. Though it seemed Lindsay was starting to find some common ground with Michael Lohan following her release from rehab, the last few weeks have proven to her that her father hasn’t changed and is still out to use her fame to his own advantage.

Kids, do you smell dissent in the ivory tower of chew, spit and make believe? Just when we all thought the house of Lohan was swigging giant gobs of giggles and hugs, papa Lohan had to go and spoil it by becoming his very own media whore.

Says our heroine: “I am sorry that my father has continually chosen to speak publicly about our relationship, my mother, my siblings, and my professional team. I am working through my recovery day-by-day and find his public media bouts unnecessary and damaging.”

And my professional team? Indeed, let’s not forget that our darling Blohan is also a professional, whatever that means in the crackdens of LA.

One day when Blohan is driving through the corridors of Malibu she will see a grand billboard picture of Papa Lohan smiling back at the universe- ‘I couldn’t have done it without riding my daughter’s coat tails.’

Why settle for your daughter being a media whore, when you can be one too?

MICHAEL LOHAN FEARED TO HAVE A HEART ATTACK.

MICHAEL LOHAN AVOIDS JAIL FOR THE TIME BEING.

MICHAEL LOHAN IS NOW GETTING READY TO GO TO JAIL TOO.