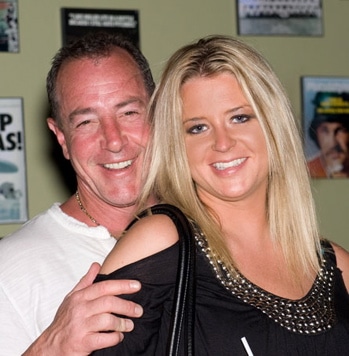 The chipmunks in Milo’s closet are sighing with relief.

Michael Lohan has been spared the fate donned on his daughter Lilo this morning when his ex fiance who he kick beat her face in with his size 14 shoe was let off in court. For reasons that anyone here in the office can quite actually understand, Kate Major, Milo’s unfortunate ex squeeze decided to drop all charges and as she said ‘get back to living her life,’ in essence depriving society some sort of collective justice for the enigma called the Milo Insane train.

Dlisted:Michael Lohan was arrested last month after his then girlfriend Kate Major told police that he tossed her out of a chair, kick ball changed her in the face and threatened to murder her. It’s what most of us call TheWayMichaelLohanDealsWithShitShuffle. At the time, Kate took out a restraining order against LiLo’s ex-father, because she was afraid he would follow up on his threats.

Michael and Kate were face-to-face again in court this morning for his arraignment. Instead of begging the judge to send Michael Lohan to death row forever (not an unreasonable request), Kate asked the court to drop all the charges and cancel the restraining order she has against him. Radar reports that the judge honored Kate’s request and killed both the charges and the restraining order. But the judge told Kate that the charges against Michael Lohan could be re-filed if he gets busted again within six months.

Which has us all wondering in the office how could this all be? We know for sure Milo didn’t pay, especially ever since Lilo has been locked away and can’t give her dad pocket money. Did Kate Major have second thoughts, feel a sudden rush of empathy for the sorry heap of a man in front of her, or was it just that million dollar smile he flashed at the waiting paparazzi that convinced her “Milo must be allowed to remain free and continue the hard work of entertaining media hacks worldwide who depend on his daily presence to bring food to their table?”

Michael Lohan is now getting ready to go to jail too.