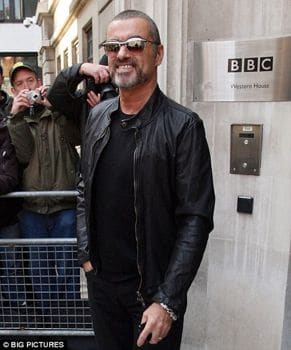 Singer George Michael has acknowledged that he behaved egregeriously when he crashed his Range Rover high on cannibas, which landed him a one month prison sentence calling it karma.

dailymail.co.uk: The 47-year-old former Wham! singer said he was ‘ashamed’ to have broken the law repeatedly, adding that he is now in therapy over his drug abuse issues.

In an interview with BBC Radio 2’s Chris Evans Breakfast Show, he said: ‘By the time I went to court, I knew this wasn’t going to happen again. I knew I was going to lose my licence.

Lose his license but quite possibly as a result of his public contrition gain a larger public following and repair his battered public persona.

He said he was sent to prison for two reasons – because it was his second conviction for the same offence, despite the fact no cannabis was involved on the first occasion, and also because: ‘I’m George Michael and the poster boy for cannabis.’

And when you’re the poster boy for bad behavior you should be quite amenable when the sherif drops round with your arrest warrant. After all, if you can make a career off your public image, you can certainly lose one too as a consequence of it, if the recent fracas involving John Galliano should undoubtedly prove.

Michael was later downgraded from a category C prisoner to category D and transferred to Highpoint Prison, an open prison in Suffolk.

His last night in prison was ‘great’, with ‘every single staff member’ and prisoner getting his autograph – some of them on headed prison paper.

Time can never mend the careless whispers of a good friend to the heart and mind ignorance is kind and there’s no comfort in the truth pain is all you’ll find….