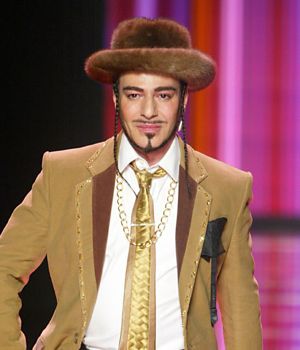 Taken responsibility for your actions lately?

Neither has John Galliano. In what would appear to be yet another PR masterpiece, Galliano has reportedly checked into a rehab facility, hot on the heels of his public shaming and subsequent dismissal from Dior. And no sooner had Galliano’s pencil-thin douchestacshe succumb to the 5 o’clock shadow during the plane ride to The Meadows in Arizona, where sources say he has checked in, than a public outcry in his defense has ensued.

A general consensus has formed in support of Galliano, embodied in conversations starting in “I absolutely don’t condone racism, BUT …”, in which fashion heavyweights like Giorgio Armani, Franca Sozzani and Patricia Field have essentially victimized Galliano, describing him as a poor soul who has been run to the ground by a life of theatrics and alcoholism – and they are quite certain ‘he meant no harm by it’.

So where does the everyday drunk fit into this model? Lacking an overpriced PR team and heartfelt backing from equally intoxicated colleagues, how can the rest of us leverage our vices to excuse the otherwise inexcusable? It would seem the guestlist at the gates into this world where addiction in itself is a rationale for poor taste is limited only to those crowned with the title of ‘celebrity’, leaving the rest of us forced to bare the weight of our actions rather than romping on the plush green lawns of any given overpriced addiction center to the stars.