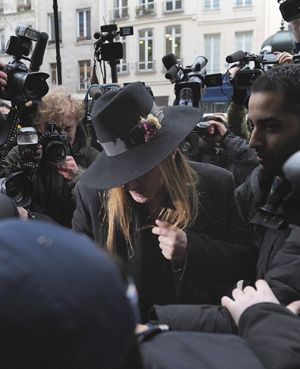 A life filled with transgression.

Off the back of a video that shows famed eccentric designer John Galliano ranting he loves Hitler and the supposed fortune of two women he was verbally accosting at a French bar over how lucky they had been spared being ‘gassed’ the house of Dior this morning has officially severed its ties to the designer, this in light of allegations of him hailing racial and misogynistic (how ironic) abuse at a couple coincidentally at the same bar/cafe in which the cellphone video was originally filmed a few days earlier.

nytimes: Sidney Toledano, Dior’s president and chief executive officer, referred to Galliano’s “odious behavior” and issued a brief statement on Tuesday: “I condemn most firmly the statements made by John Galliano which are a total contradiction with the essential values that have always been defended by the House of Christian Dior.”

A total contradiction indeed, but what one has to appreciate is that for the longest time John Galliano in a profession possibly other than fashion would have been pushed aside or dismissed for his rancorous behavior, but with heightened demand for his diabolical whimsy and theatrical transgression on the runways he was simply adored. Never mind that most of the time you could never hope to wear any of his items walking down the street, the idea was simply to push a type of theatrical wildness in the helping of selling perfume and handbags.

In the same way can we really be surprised that this man who was rewarded for virtue of his transgressive behavior on stage didn’t also lead a transgressive life offstage as well? And yet, today the world is shocked and appalled to find out that the famed and adulated designer wasn’t able to leave his wild behavior on stage- where it was understood to be a type of theater, a type of absurd theater it seems Mr Galliano lives to the core on and off stage.

* Galliano: “No, but I love Hitler and people like you would be dead today. Your mothers, your forefathers, would all be fucking gassed and fucking dead.”

It is indeed sad that Mr Galliano has acted the way he has, but on some level one has to appreciate that despite his genius there was an underbelly to his talents which symbiotically acted to make Mr Galliano whole- a type of wholeness it seems that the world has little appetite for and judging by the drunken state and vitriol of Mr Galliano’s comments, one might suppose he too must have the same degree of repugnance towards himself as the world today has of him. Who can argue that with heaven comes hell down the corridor…?