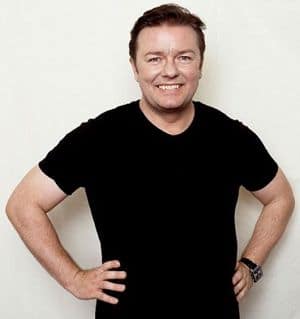 Be careful what you wish for.

By all accounts Ricky Gervais did an amazing job of entertaining Hollywood and its stars at last night’s Globe Awards. Whether they enjoyed the entertainment that was offered courtesy of the biting and scathing star comedian is of course another thing.

To date the American press has been wary of Gervais performance last night as were some of the attendees who became the target of Gervais bitter sweet venom. Attendees who at this stage of their career may well be used to scathing remarks about them, but not necessarily at an awards ceremony meant to conceivably gloat on them or to their face in front of industry peers or audiences at home who are often used to tales sugar coating their existence.

Of course CoCo as we like to call Charlie around the offices was always going to be an easy target- since his remarkable recent misbehavior can hardly be ignored (well certainly not by Gervais who specializes in the grimacing salaciousness of bad Hollywood behavior- but which tabloid doesn’t?) and for the simple fact CoCo knew better to stay home this year.

But Gervais one for controversy decided to up the ante and start having a go at the stars in attendance just to prove to all of us at home that a, he is hysterical, b, he really doesn’t care what Hollywood or his bosses think of him, c, he absolutely cares what Hollywood think of him and d, he’s gotten so good at the game that he realized becoming one’s own enfant terrible is a wonderful way to ensure your own longevity in Hollywood- until the day that it of course it doesn’t.

…it wasn’t until “The Office” creator mocked two of the night’s biggest attendees, Angelina Jolie and Johnny Depp (who both controversially scored nods for the critically panned film “The Tourist”) that jaws really started dropping.

“I haven’t even seen ‘The Tourist,’” Gervais said. “Who has? There’s this ridiculous rumor going around that the only reason ‘The Tourist’ was nominated was so that the Hollywood Foreign Press could hang out with Johnny Deppand Angelina Jolie. That’s rubbish. They also accepted bribes.”

Gervais was referencing a lawsuit filed against the HFPA, who run the Globes, by their former PR firm on Friday which alleges the association was involved in payola and unethical dealings. And although Depp managed a half-smile for the camera amid Gervais’s insults, he seemed visibly uncomfortable.

Mmh, poor Johnny. But if there was a way Gervais could make it up to Johnny he found it by at least letting the actor know his biting slander humor had room to go round the room. Which is Gervais’ polite way of saying- ‘nothing too personal…’

Robert Downey, Jr. was the next to fall under Gervais’s wrath as the host introduced him as someone better known for his stays “at the Betty Ford Clinic and the L.A. County Jail” than for his prominent movie roles. The “Iron Man” star and recovering addict wasn’t exactly appreciative of the scathing reminder.

“Aside from the fact that it’s been hugely mean-spirited with mildly sinister undertones, I’d say the show’s going pretty good so far, wouldn’t you?” a miffed Downey then asked the audience.

Which was Downey Jr’s way of letting Gervais know that he himself wasn’t particularly impressed with Gervais. Not that Gervais cared anyway, given his one hour absence (who knows – for more drinks, or a special spanking session by his bosses for his supposed insolence) and his continued metaphorical slaps to guests who are so often used to being adulated and pampered to.

Another awkward hush soon fell over the auditorium as the creator of “The Office” continued on his verbal rampage, this time taking a generalized swipe at the USA by referring to the Best Foreign-Language Film category as “a category that no one in America cares about.” Gervais also took digs at the “Sex & the City 2” stars by stating that he was sure the team that airbrushed the poster would win the award for special effects, chastised Steve Carell for being “unappreciative” and leaving “The Office,” and claimed Sandra Bullock told him backstage that she thought that “poor people were gross and smelled bad.”

But at least there was one guest who didn’t mind too much, and who at least was clever enough to state that he thought Gervais was amazing and didn’t go far enough- that being the actor Bruce Willis who got be called ‘Ashton Kutcher’s dad,’ an open stab at the actor’s ex wife’s considerably younger husband and her continued ability with the help of plastic surgery to defy the natural laws of gravity and aging.

“He was fantastic, he killed it, he did great,” Willis enthused.

Of course that is not an opinion not necessarily showed by many of those in attendance- note English actress’ Jane Seymour‘s reaction:

“What I saw didn’t seem terribly funny. I don’t think he’ll be invited back to do it next year, not in a hurry,” the former “Bond” girl told FOX411’s Pop Tarts at the Relativity Media and Weinstein Post Golden Globes Party presented by Marie Claire. “I just think it’s about how it’s done. The way it came across and the way it was being received, I think there was a general feeling in the room that ‘this isn’t appropriate.’”

Which begs the bigger question, in a city where Hollywood actors make fantastical money and out of work actors down the road live in abject poverty, and let’s not even bother mentioning the downtown mecca that is skid row, nor those individuals watching from home, whom most of are still struggling for mortal survival in prolonged unsettling economic circumstances what exactly is appropriate? The divide between the lavished and revered and those left to fend for themselves in an environment that offers little yield hasn’t been this wide in a while and sometimes it takes a comedian, especially a foreign one who secretly revels in letting America know that the joke is really on them.