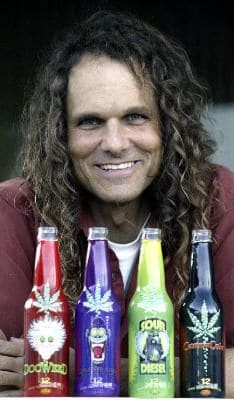 As we predicted, here comes coverage of yet another questionable beverage whoring itself as a media spectacle and intentionally flirting with being banned – this one appealing to the medical marijuana crowd with ’12 mind blowing ounces’ of Canna Cola, set to launch this February.

Positioning itself as the sexy ‘light beer’ of the endangered ‘medibles’ market, Canna Cola and its sister brands – including Orange Kush and Grape Ape – will reportedly contain 35-65mg of THC at a cost of  $10-15 per bottle. A risky proposition, considering the pending ‘Brownie Law.’

According to the Santa Cruz Sentinel: the bill in question “would double the penalties for anyone who produces a product that combines marijuana with ‘a candy product.’” So much for ‘a spoonful of sugar…’

Of course, all this likely means little to owner and entrepreneur Curt Butler, he’s just an aging idea man who openly stated “I don’t do drugs…Never have. I never drank, never smoked. I’m a clean-living guy. I’ve had two beers in my whole life, and I remember them both too. No marijuana, I’ve never smoked a cigarette. I take an aspirin when I get a headache. That’s it.” Not that you’d have trouble telling that from the painfully narc-looking press release picture.(see above).

The Sentinal‘s report continues, saying, “What really intoxicates Butler is branding, the art of differentiating a product in the marketplace through words and images.” Which seems to further suggest that the entire line is a marketing ploy in the Four Lokos or Scottish Spirits vein – but is Mr. Butler, just a bit too intoxicated on, well, whatever it is that gets him going?

“You look at all the marijuana products out there, and they are so mom-and-pop, hippie-dippy and rinky-dink,” he said… before deciding to use a pot leaf made out of bubbles as a logo, and ‘Doc Weed’ as a flavor.

The travails of being a sober marijuana entrepreneur…

WHIPAHOL: ALCOHOL-INFUSED WHIPPED CREAM IS WHIPPING KIDS AND PARENT GROUPS INTO A FRENZY

FRUIT FLAVORED ‘BLACKOUT IN A CAN’ FOUR LOKOS FACES BAN