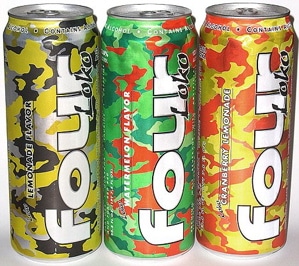 OK ‘Alcopop’ lovers, It may be time to stock-up on your Four Lokos, as officials at yet another college, Ramapo, in New Jersey (no doubt why it’s become a news story), “decided to outlaw [the drink] after 16 students needed hospital treatment for alcohol poisoning.” But despite the over-eagerness to remedy the university’s high-profile drinking problems, whether Four Loko was the culprit remains entirely in question.

Daily Mail: The decision to ban it at Ramapo came after the art college’s administration noticed the increasing popularity off the drink on campus.

‘Students who consume it become intoxicated very quickly, and we know it’s been banned at other colleges so we didn’t wait around for toxicology reports. We just banned it right away.

Nicknamed ‘blackout in a can’ and ‘liquid cocaine, as the Daily Mail explains, ‘Four Loko is carbonated and contains 12 per cent alcohol and a dose of caffeine. Drinking it is the equivalent of consuming three beers, a can of Red Bull and a shot of espresso.’ Could we ever find a better fuel for fist-pumping?

Luckily, for now, this glorious concoction (selling at ‘just $2.50′ a piece!) is still available on the corner of nearly every Jersey street, making it even easier for us to get all amped and liquored up in time to do some late night clubbin’ creepin’.

Still, it’s not hard to see why officials love to hate Four Loko: why wait for proof when you’ve got a veritable scourge on your hands, a brightly colored, and fruity flavored menace to society to pass the blame off on? Why waste the money doing the (seemingly) impossible and encourage kids to drink responsibly when it’s altogether easier (and more cost effective) to blame an easy scapegoat with a ruined reputation?. Isn’t this the epitome of laziness, a cop out that will only maintain (or exacerbate) the self-destructive status quo? Before banning something, why not at least wait for the results of your investigation?