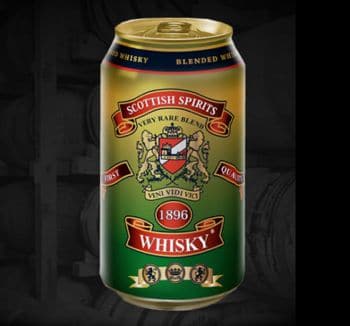 The worldwide web is already buzzing in anticipation of America’s next soon-to-be-banned canned beverage, Scottish Spirits: 8 shots of, well, probably funky flavored grain alcohol parading as Scotch Whisky in an aluminum can being marketed as “lightweight,” “portable,” “entirely recyclable,” and “the perfect size to be shared between three people.” But of course, you’ll be taking it straight to the face, because what 18-year-old college freshman could resist bonging a family sized serving of cornerstore liquor when it’s never been more economical, easily concealable, and better for the environment to get sloppy ass drunk?

Despite tongue-in-cheek corporate protestations to the contrary, as Time’s Nick Carbone noted,“whether you mix it or shoot it straight from the silver can, the math is indisputable. You’ll be downing eight shots of whisky from a container that you can’t close back up.” But the article, titled“Whisky (8 Shots of It) In A Can: What Could Possibly Go Wrong?,”  hits on the the key point of the marketing campaign just as it fails to fully analyze it.

In closing Carbone cuts to the lonely heart of the situation writing: “Is this real whisky or not? We think that’s asking the wrong question. What’s lurking inside this can is pure intoxication — just the sort of packaging that encourages excessive use.” Which is why I would propose a more critical question: Isn’t this exactly the point not just of the whole marketing campaign, but of the whole product line?

More precisely, is not Scottish Spirits’ marketing strategy to build a Four Lokos-like buzz among users (no pun intended) so as to capitalize on the free and easily re-bloggable outrage as the market for ultra-kitsch canned intoxicants just begging to banned approaches critical mass?

Isn’t this a sign that the hottest trend in contemporary marketing is to replicate the explosive power of online memes by serially creating the most absurd concept products imaginable in a furious attempt to force one of them into (hopefully) going, like, totally viral? Or again, isn’t the point of this product only to trend, to rocket to the top of the youth market in a one-off attempt to make a quick buck before violently downward spiraling into notoriety via an even more highly publicized demise?

Which of course creates an entirely new business model: market your product as a something sustainable, recyclable, when the longevity of your brand is anything but. To put our point still another way, we could say that everything’s becoming recyclable, even our brands.

FRUIT FLAVORED ‘BLACKOUT IN A CAN’ FOUR LOKOS FACES BAN

WHIPAHOL: ALCOHOL-INFUSED WHIPPED CREAM IS WHIPPING KIDS AND PARENT GROUPS INTO A FRENZY