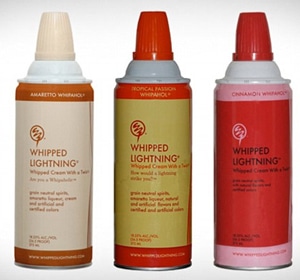 Frat boys, hipsters, ultra geek-chic uber nerds, and idealistic art chicks looking for the next anti-establishment product  can probably rest easy, as even MADD  (Mothers against Drunk Driving) is mad about Whipped Lighting, having gone as far stating, “’We are concerned about the high level of alcohol packed in something most people consider dessert.’ At 18 percent, three times the quotient found in beer, that makes for one very intoxicating sweet tooth…

Thankfully, even this is a hardly a deterrent. We’ve finally found a parent-angering party product that lets prospective revelers know all its advantages by very act of lobbying against it. Isn’t MADD just betraying the fun to be had here, more or less letting everyone know that this particular brand of rebellion (it’s hardly news that even the experience of rebellion is now branded) has the extra advantage of being sweet and tasty?

If you’re not yet excited to test out the next distracting scourge set to become the bane of all the typical sociopolitical groups, then think: you’re not just missing out on excitement but –  as with the Four Loko experience –the next fleeting bona-fide and branded countercultural movement. In this case, one in which you too can delay snorting up the last of last Saturday’s eightball just long enough to piss off your RA by gurgling the alcohol infused ‘Whipped Cream With A Twist’ in sexy and exciting flavors such as Cinnamon, Amaretto and, our personal favorite, Tropical Passion – perfect for taking advantage of an all too willing freshman ‘bitty’ at your beach themed house party with some chemical flavored and tin-can-tinged date rape foodplay.

And nevermind that, at least according to the Daily Mail,“Students warned it can be dangerous if added to things like high octane cocktails or Jell-O shots, where the alcohol flavour is already masked, causing intoxication without people realising how much alcohol they have consumed,” ’cause anyone in a top tier frat’ll tell you that shit’s just for saps.

Just ask UCF student Bo Frisby, who gloated: ”I think it’s awesome to throw it on some Jell-O shots. Fantastic.’ Of course it is: all the parents, cops, and squares are saying it’s bad news, which means Whipahol has just become the next cool college thing to do. Don’t snort it, just spray it!