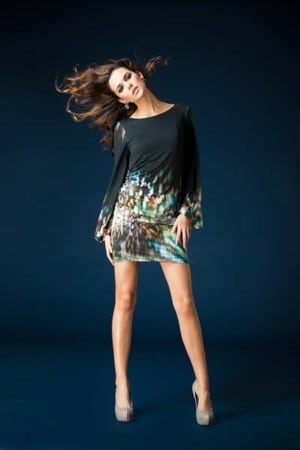 SCV: What would happen if you booked the cover of Vogue?

AR: I’d make sure next time I do something for Target or the other big staples to charge them double my day rate.

At this stage another gaggle of well wishers drop by to greet Ms Rizzo, who in effortless elan greets them.

SCV: You sure have a lot of fans.

AR: I have a million acquaintances but few close friends.

SCV: What have been some of your biggest breaks?

AR: I wouldn’t necessarily say I have had the biggest catches. I’m still waiting for a real big break. Of course getting DKNY and Ralph Lauren Rugby have been great moments and then being the cover of WWD. It stunned me. It was during fashion week- so getting that type of exposure during fashion week was great. Then there was Victoria’s Secret...

AR: I don’t think I was ready for it. I was uncomfortable. There they had me shooting in these shear panties and there I was feeling real prude about it instead of just owning the moment. I think they could see that in the photos. It happened so much younger in my career.

SCV: Does modeling define you?

AR: No, hardly- it’s just my trade. At best it’s my alter ego. I think one thing you have to remember about modeling is how replaceable you are. It happens all the time. You put on a bit of weight, or there’s a new it girl or the trend changes to more masculine girls- there is so much that you can’t control. Modeling as a career is a means to an end- it would be foolish to let it define me, my identity. So often you don’t matter to these people and you shouldn’t take that personally, it’s just the nature of the industry…

I think what’s important is knowing who you are, what you are looking to accomplish and that at the end of the day in a business like modeling you could be ‘thrown away’ with no real legitimate reason.

SCV: Are men and women enthralled by you?

AR: No not me at all. Maybe models in general in this city. Its someone already being accepted as attractive and i guess that comforts people. Nobody is ever really enthralling unless you spend time with them.

I think people are consumed with their own perceptions and desires . At best