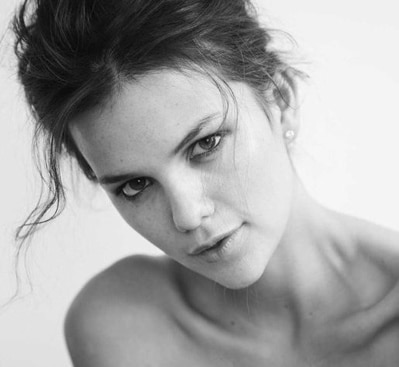 SCV: How do you feel about your success?

AR: It’s just a job, it’s something I am very fortunate to be able to do. The experience is unique and special as is the money haha. Make no mistake when I am on set with full hair, makeup, and lighting it’s just a job. I go home and shower it off and look like a normal girl.

SCV: How do you then explain the impression people have of you and girls like you?

AR: I think it’s the marketing. I also think its the blogs who make a big show of things, building things in certain ways, frankly I think most of the people in all these reality shows and campaigns are no one special. They’re just pretty faces made to appear larger than life and the public so often forgets that and is seduced to believe otherwise.

SCV: Give me an example.

AR: Come on – look at some of the shows CW makes, for example Gossip Girl, Glee. Are you telling me those people are mesmerizing actors with real star talent? Do I think the actors on the show have some super talent relative to the degree of hype they get? Not particularly. They’re just part of some very clever PR campaign, where the public is made to believe that they are super stars or stunning.

Of course I do think some of the actors do great work, don’t get me wrong. It’s just sad how much press goes to the random kids and their personal lives.

SCV: So if you were approached you would say no?

AR: Hell no- if the money was right I would jump in. It’s just that I would never confuse myself for being too good for any of it.

SCV: Have you thought about being an actress?

AR: That’s funny. No- not really. I don’t deserve it. It’s not what I aspire to. Not that I wouldn’t accept such an opportunity for a compelling project. But look around you- there are so many people who breathe and die acting all day long, going to auditions, rehearsals, school- these are the people who ought to be doing it.

SCV: That and who the public wants?

AR: It’s all about projection. Take someone like Angelina Jolie, who is so striking because she obviously has talent