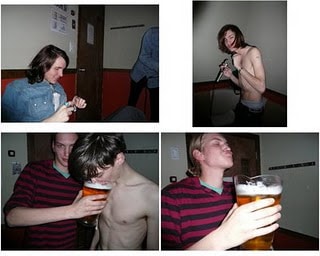 constrained by traditional heterosexuality and masculinity, an outdated and unnecessary burden. “I might have been gay if I’d been raised differently,” one said. “Aren’t we all born bisexual and culture pushes us one way or another?” He challenges homophobic customs and assumptions. One such young man sings in a gay chorus; another marches in pride parades as an ally; a third intends to “come out” as mostly straight in the military to test the “don’t ask, don’t tell” policy. He wants to know, how gay does one have to be to count?

Second is the guy who finds guys physically attractive. One interviewee pleaded, “I mean, come on, tell me some guys aren’t hot!” If he finds himself staring at men in the gym, on the sports field, around the neighborhood, and in Details, Instinct, and Vman, then how can he say to himself that he is totally straight? He notices guys in the buff and who are buff, visually appealing, and pleasurable to be around. He wonders if he only desires the toned body, stylistic appearance, and athletic facility—and not the sexuality.

A third guy may admit that he’s a little sexually attracted to guys. It may not be his top priority, but he’ll acknowledge that men occasionally pop up in his masturbatory fantasies. He doesn’t expect to have sex with a man, but he isn’t ruling it out; he has a willingness to experiment. He’s into sexual pleasure without strings, without meaning. Anything is possible, given the right circumstances with the right person. (Well, almost anything: most interviewees drew the line at actual male-male intercourse.)

A fourth guy is a guy like Dillon: he grants that he’s not totally straight, and that his feelings for guys are more than just sexual—they’re romantic. He can imagine experiencing emotional, intimate relationships with other young men. It just seems natural. He’s into cuddling without the pressure of sex, and he could spend countless hours with “special buddies.” He’s been infatuated with best friends, teammates, and videogame partners.

All four guys have one thing in common: unlike their totally straight brothers, they’re not averse to sexual or romantic feelings, encounters, or relationships with other males.

It’s unlikely that mostly straight youth are limited to just four types. As additional young men recognize and reveal their sexual breadth, they assist all of us to understand previously unrecognized sexual and romantic possibilities. How many of us have these feelings and are clamoring to “come out” as mostly straight?