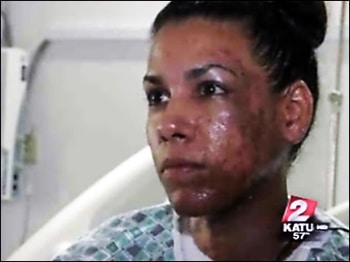 We have reason for concern today, in light of a copycat acid attack in Arizona, the second such assault this week. The victim, Derri Velarde, who had been going through a divorce proceedings believes the incident, unlike that of initial acid victim Bethany Storro, was not random.

In an interview quoted by CBS News, Velarde speculated that her attacker “wanted to make sure she disfigured me so that no-one would want me.”

But still, do these two attacks in such close proximity hint at a new trend forming, and could these kinds of attacks with acid become more common in the future?

CBS News analyzes the motives behind such attacks, saying: “It’s absolute hatred of the highest degree,” … “It is probably in the present day one of the most demeaning forms of punishment you can think of, to destroy someone’s face.”

It is, if anything, surprising that such attacks, what with the contemporary emphasis looks — especially for women –  are not more common. Being burned with acid would, we can be sure, prevent the target from Tweeting narcissistic bikini pics: a contemporary right of passage. If you want to destroy someone’s life these days, what could be more effective ? (And cost effective as the CBS report argues.)

The CBS News report points out that such assaults happen much more often in other parts of the world. “In international cultures,” … “it’s usually a way of controlling women, especially women who have spurned advances. It’s a way of men exerting control and putting women in their place by harming their beauty.

If anything is certain, it’s that our culture adores berating women –  especially beautiful women – in an attempt to control them by ‘harming their beauty,’ emotionally disfiguring them.

Whether lashing out against Heidi Montag, Megan Fox, or even favored freaks like Jocelyn Wildenstein we should count gawking at imperfect (or disfigured) female faces among our favorite national pastimes.

It remains, however, altogether questionable whether such abuse will spill over into the the physical space of American Life. The trend, it seems, is on the rise…

Bethany Storo has acid thrown on her face from a random stranger.