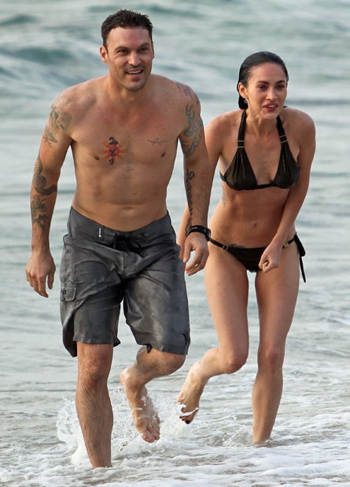 The metaphor that couldn’t scream louder.

Just in case you didn’t know it fame whore Megan Fox and her boy toy Brian Austin Green recently got engaged(again) whilst vacationing in paradise. Apparently after Brian swam a triathlon and Megan did a whole heap of sit ups and looked for sea shells to scrape a new tattoo on her torso Brian leapt out of the water and surprised his master with an engagement ring. So delighted was pumpkin pie that she got kiddy, blushed, did 3 one arm up push ups in a row that when she came up for air to look at the engagement ring her sex slave it was no longer there. That’s when half of Honnolulu was summonsed to the beach to start poking at it with jack hammers and high explosives.

Her on-again-off-again boyfriend proposed on the beach at the Four Seasons Hualalai hotel on the Big Island in Hawaii, sources tell Us, but Megan lost the ring in the sand.

“I saw her jumping up and down,” a witness said. “Later, I saw a half dozen staff sifting through the sand.”

The search was reportedly unsuccessful.

“Security and maintenance staff spent a couple of hours looking for it,” another source told Us. “No one found it.”

Later that evening when Megan and Brian were doing back to back triathlons they looked at each other and wondered out aloud if the fact that Megan had dropped the ring into the sand somewhere was an omen to come. For a moment they looked into the great blue skies, summonsed the lord Zola (a special triathlon god that HOLLYWOOD people prey to) and asked him if it was indeed an omen. For a moment nothing happened, but that’s when out of the corner of his eye whilst Brian went down to do a quick push up he came across a Coca Coal can. So now next time you look at Megan’s finger you will know like us that shiny red object is what true love is.

Megan Fox isn’t really a slut, she just likes to play like one.

Megan Fox confirms for us having a vagina is an asset.

Media Bitches we’re in the mood to slap this weekend.

Other Bitches that annoy us this weekend- Megan Fox and ‘Lilo.’