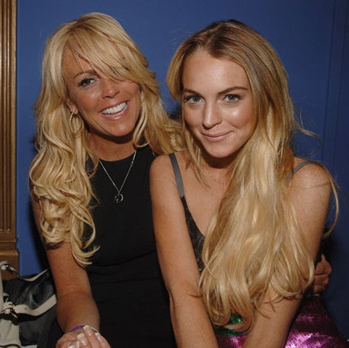 How long can you hold on without puking?

According to the NY Post, Dina Lohan and her dream team will soon be appearing on your TV screen ad nauseum courtesy of her planned reality show ‘I can fart louder than you.’ Already school children have been heard to be praying to the God Shiva that the show doesn’t get picked up, but Dina Lohan is adamant that this time round she’s really going to make sure your summer a complete eye sore.

NY Post: Lindsay Lohan will appear in a new reality show that will follow her mom, Dina, and her siblings. Dina told us, “We have already started filming. The cameras follow us in our daily lives and as we promote our businesses.

Excuse us, but isn’t this an oxymoron? After all isn’t this what the Lohan cash cow family machine does already? Oh but there’s a catch. What kind of catch you wonder, let’s have mama Lohan explain for us…

I want to prove that we are a good, hardworking family and we don’t have the crazy lives that some people claim we do. The show will feature my kids, and Lindsay will also appear in some episodes, although she’s very busy filming and promoting her fashion lines. We’re discussing a deal with a major network.” But dad Michael isn’t welcome, Dina said.

Not to be too repetitive, but isn’t this a double oxymoron? Surely Mama Lohan doesn’t think we spend the day gouging our eyeballs out wondering if the Lohan family cash cow is crazy or not. Even the destitute on skid row know the answer to that. And what’s this business of not inviting papa Lohan not to appear on the show, surely mama Lohan is pulling our legs. After all how are we suppose to cynically chuckle without the occasional fist fight along the way between ma and pa.

‘I can fart louder than you’ is bound to be a knock out. Don’t you wish your life could be a reality program too?
Here are some of the suggested episodes currently being filmed.

1/ Dina Lohan consults Danielle Staub to see if she too should make her own sex tape.

2/ Lindsay Lohan drops her cell phone on the ground and blames an illegal Mexican.

3/ Papa Lohan accidentally bumps into Lindsay at the local psychiatric ward where he is being treated for lucid dreams.

5/ Ali Lohan, Dina’s youngest daughter is made to get a part time job at Hungry Jacks so she too can appreciate how the other half of civilization lives.

7/ Lilo gets a stint with Marc Jacobs answering the telephone for Marc before he eventually breaks down and gives her a pair of strapless shoes to beat herself up with.

8/ Michael Lohan Jr has a heart to heart conversation with Oprah as to why he feels neglected.

9/ TMZ turn up with Maury Povich the minute Lilo’s scram bracelet is set to be taken off.